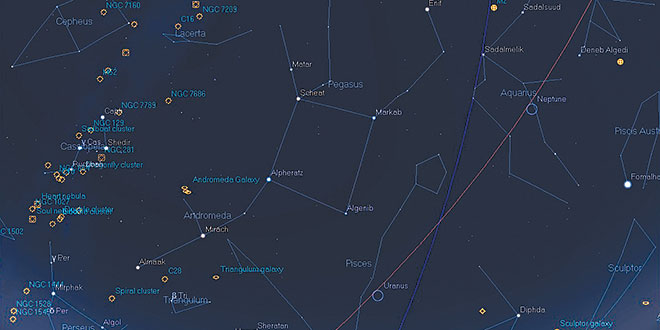 Facing east, 11 PM Sept. 5. The Andromeda Galaxy is the brightest galaxy in the northern sky surpassed only by the Magellanic Clouds of the extreme south (not visible from Florida). SUBMITTED PHOTO

Tonight, the eastern sky is dominated by the Great Square of Pegasus (the winged horse). The square forms the body of the horse while fainter stars form the neck and forelegs. The fairly bright, slightly orange star of Enif marks the muzzle. The asterism of the square is really quite easy to spot. If you don’t see it at first, think large; each side of the square is about 15 degrees on a side, so the entire asterism covers a big chunk of sky.

An interesting test of the quality of your sky can be done by counting the number of stars you can see inside of the square. If you can count a dozen or so, congratulations, you have a fine dark sky! On the other hand, observing from suburban skies, count yourself lucky to see any stars at all inside of the square. Only try this on a clear moonless night.

There are few deep sky objects visible with binoculars in Pegasus, the brightest being the globular star cluster of M15 near Enif mentioned in the previous column. Also located here is a cluster of five galaxies called Stephan’s Quintet that almost everyone has seen a photograph of but few can name. The photo appears in the famous move “It’s a Wonderful Life” in the scene where the angels are having a conversation; the galaxies serve as a stand in for heaven. Alas, Stephan’s Quintet is far beyond the range of binoculars and all but the largest amateur telescopes.

Tacked onto the rear of Pegasus is the fairly bright constellation of Andromeda. Technically speaking, the lower left star of the Great Square belongs to Andromeda and not Pegasus, although few people indulge in such hairsplitting. Most people just consider the star, named Alpheratz, shared equally between the two constellations. A galaxy that is within range of binoculars and even the naked eye resides in Andromeda. To spot it with your eyes, wait for a moonless night when Andromeda is higher in the sky; check out the accompanying chart for location.

As long as you have your binoculars out, see if you can find Uranus. The planet is rather farther than usual from us at the moment and is not quite visible to the naked eye, especially as it is close to the horizon. It’s dead easy to see with binoculars, though. The main problem is to identify which of the numerous stars in your field of view is really the planet. Currently, Uranus is in a region of the sky that is star poor, so it’s probably the brightest object in your field of view.