Jupiter Rises in the East 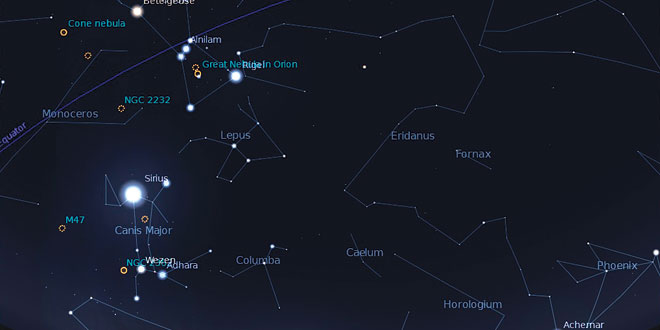 Tonight, mighty Orion has heaved himself above the horizon, but first, let’s look at the heavenly river Eridanus. Composed of mostly dim stars, the Eridanus is supposed to represent the Nile or the Euphrates. It arises near the foot of Orion and winds thru many twists and turns into the deep southern sky, terminating at the blue star Achernar. This star is one of the very brightest in the sky but is dimed by the murk above the horizon.

Achernar is never visible further north than Macon, and in fact, is mostly impossible to see north of the Florida border. Even here, it only briefly pops above the horizon in late fall and early winter. Chances are you will not see it unless you have an unobstructed view of the southern horizon. Achernar is also one of the stranger stars in the sky. It rotates so fast that it is highly flattened. It’s equatorial diameter is 50 percent greater than it’s polar diameter; in other words, it’s even more oval than an egg.

Orion was mentioned last column, but we can always mention it again. Careful observers can spend hours staring at it’s wonders both visually and with binoculars. The stars in Orion are mostly very blue in color, particularly Rigel, the brightest star in the constellation. The lone exception is Betelgeuse, one of two red supergiant stars visible to the naked eye. The name is commonly pronounced “Beetle Juice” in the U.S., and is about as close as Americans can come to the original Arabic pronunciation.

Betelgeuse is rapidly nearing the end of it’s life and will explode into a supernova sometime in the future. Perhaps a million years from now or maybe tomorrow, no one knows. A detonating supernova too close to Earth would be uncomfortable, but at 427 light years, this one should be safe enough — and we will have an excellent view. It will easily be visible in the daytime and will compete with the full moon at night.

No mention of Orion is complete without mention of the Great Orion Nebula. To the naked eye, it appears as a fuzzy star south of Orion’s belt. It’s actually a giant cloud of gas and dust that acts as a stellar nursery, and is one of the finest visible in our galaxy. Perhaps 1,000 stars lie hidden inside the nebula; only a few are visible with binoculars. Four stars at the heart of the nebula give off copious UV radiation which causes the nebula to glow with a greenish light to the eye and reddish to old fashioned film cameras. Inside the nebula stars seem to be a little too crowded to have stable orbits. Indeed, several stars scattered across our sky are thought to have been ejected from the nebula in the past.

Mr. Usher is President of the Everglades Astronomical Society which meets the second Tuesday of the month Sept. thru June at 7PM in the Norris Center, Cambier Park, Naples.