Jupiter Returns to the Evening 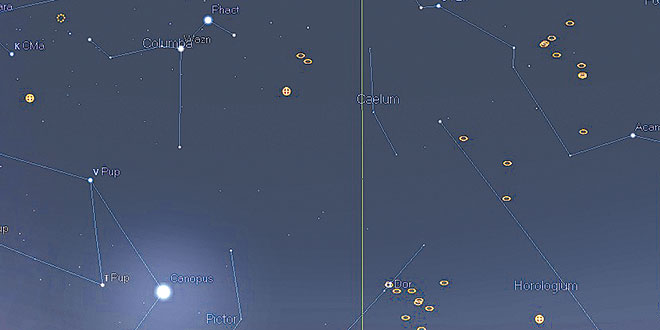 Looking South, 9 PM, Jan. 23, the vertical line is called the meridian, an imaginary line passing through both poles and the zenith. SUBMITTED PHOTO

After a vacancy of some months, we finally have a bright planet available for viewing this evening, two actually, but Venus has set by the 9 PM chart time.

Looking east at that time you can’t miss Jupiter. It’s the brightest thing in the sky. Tonight, four of its satellites are visible in binoculars. Between 10-11 PM, Callisto and Io appear so close together that they be difficult to split apart in your binoculars. The moons move fast though so this state of affairs will not last very long. A tripod will greatly aid your observations, but failing that, you can prop your elbows on your cars roof.

Canopus is the second brightest star in the entire night sky after Sirius, located in the constellation Carina, the keel. It is visible throughout the southern United States, but only in Florida does it rise high enough out of the horizon murk to show how bright it truly is. Tonight it will grow still brighter as it rises and crosses the meridian around 10:39 PM — that’s when it reaches its highest point of the evening.

Canopus is also the star with the greatest intrinsic brightness in our corner of the Galaxy. From 312 light years away, it still reaches -0.65 magnitude and is around 13,600-times brighter than the Sun and 65-times its volume. There are no other stars of greater luminosity within 700 light years. The brilliance of Canopus has been put to good use by NASA for interplanetary space probes. Such a bright star located far from the ecliptic is very useful for navigational purposes. Many probes carry equipment designed to “lock” onto the star.

Carina was once part of a much larger constellation called Argo Navis, after the mythical ship Argo. Astronomers found a large constellation in the Milky Way too unwieldy to be useful and broke it apart into several different constellations about two centuries ago. The Milky Way in this region is full of open clusters and nebulas, most notably the Eta Carinae Nebula, rival to Orion, but it won’t rise for a couple of more hours.

On the night of Jan. 17, our club telescopes will be at Collier-Seminole State Park (weather permitting) for a public viewing after 6 PM. Take the Goodland exit from Marco, and the park will be on your right. Also on Jan. 23, there will be telescopes at Big Cypress National Preserve at 7 PM; take US 41 east past SR 29 and look for a turn between mile marker 73 and 74 (Seagrape Drive).

Mr. Usher is President of the Everglades Astronomical Society which meets the second Tuesday each month at 7 PM in the Norris Center, Cambier Park in Naples.