Jones Reflects on 30 Years of Service 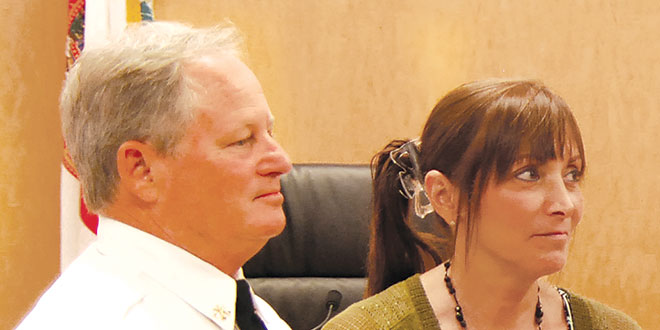 No words can express 30 years of selfless service to the Marco Island community coming to a close. Marco Island Fire Rescue Division Chief Don Jones, having embarked on his life as a firefighter, Sept. 8, 1984, is retiring.

Chief Murphy had this to say: “Division Chief Jones committed himself to the fire and medical service, his community and to the people that called us in their time of need. His commitment and partnership with businesses and Marco Island Charter Middle School certified thousands over the years in CPR, and those individuals did go on to save lives.”

Coastal Breeze News asked Don what changes had taken place in 30 years:“The way we respond to fire scenes and medical calls has an aspect of safety that wasn’t there before. When the CDC said everyone had to wear gloves and goggles, it was a hard transition in itself, and sometimes patients were offended. Even bunker gear is different. We didn’t have bunker pants; we wore street pants and rubber boots. Guys didn’t want to wear air packs at first either. We were the first ones taught how the gases emitted after a fire are worse than the ones during the fire. You must wear an air pack while you’re overhauling a fire. We implemented all of the safety standards. The life expectancy of a firefighter was only eight years after retirement. Now, it is much higher. The brotherhood has always been there. Never leave anyone behind has always been there; some things don’t change. The safety measures and fire technology has though.

Once the condos built out, some were without sprinklers in the buildings. Fortunately, most of that has changed now, too.”

Coastal Breeze asked Don to tell our readers some of the hardest moments he faced: One of the hardest Don recalls was when a young boy was hit on a bicycle. “We worked really hard on him, but we lost him. The next day, his father came back. He was out of town when it happened, and since I was the first on the scene, I was asked to walk the scene with the parents. They wanted to know what happened to their son, every single detail. Not for litigation or anything, just because it was their son. It was understandable, but it was difficult. It’s not easy to pick out the hardest moment. There was another little girl that died; that was horrible too. She had a medical condition; we worked on her all the way to the hospital. There have been many; it is to be expected as part of the job, but the calls with children really stick with you. Over the years, you resolve that dying is a part of life.”

The conversation turned to what the department does beyond the call itself. Don notes: “There is so much more that you do before and after a call. The call itself is maybe 20 minutes or less, and it’s over. But who takes care of a loved one when you just transported their caretaker to the hospital? That person needs assistance too. We used to have an elderly advocate but not anymore. At 2:30 in the morning, we have no one to call to help us. The police officers help when they can.

There was an elderly gentleman who had a stroke and wasn’t able to take care of himself. His wife took care of him. While driving one day, she had a stroke. She ended up driving north in the southbound lane of Collier Boulevard in the middle of winter. She finally veered off into a gully. It was a bad accident. He didn’t have any injuries to speak of, but she had had the stroke and suffered injuries in the accident. I ended up driving all the way to his house in Naples to try to find information on contacting children or relatives, hoping they can make arrangements to care for their father while the mother was in the hospital.

Another example of what happens beyond the call was an accident on San Marco. A car drove right into a house. We finish the call and now have a house that is wide open. We got plywood, and my crew built a wall because the homeowners were out of town. We were out there with skill saws; it literally took hours.

There is so much we do before and after a call that is so important.”

Don doesn’t remember every single call. “It’s a safety mechanism. Of course, there are calls that stand out, an accident on San Marco Road on the Fourth of July where four people were killed; or the time I was working on med-flight and we had a bad call where a guy got his leg was caught in a wood chipper; certain fires like the Eagles Nest, the Yacht Club fire or the golf course fire, stand out in my mind.

Thirty year’s hold good memories too. Coastal Breeze asked Don about them: Don said, “Some of the extra things we do, like CPR in the schools, all the classes we have taught over the years. You get to meet so many great people and the local kids. I always asked them, ‘Who in this class would consider becoming a firefighter?’ Seldom did I get an affirmative answer. It’s interesting; a few did, and they stand out — Dan Stoller, Chris Bowden and Jeffrey Kutzke. We made the contact when they were kids in school, and now they are firefighters.

Some of the people we brought back have many years of productive life. One guy was hit by lightning, went into cardiac arrest. We brought him back. He used to come to the station every year to thank us. I would tell my wife, ‘we got a save today!’ When you hear ‘I am here now because you guys came to my house…’THAT’s really neat!”

Jim Chute, a scoutmaster, thanked Don for his years of endless support for the scouts. Don worked on education, and not just badges like CPR and first aid. He did all the medical training for the Eagle Scouts. Don said, “My son was in the scouts for years. We went to Colorado, Yosemite, Wyoming, North Carolina…Those were some of the best times between us. Scouting gave me so much. Jim was instrumental with the scouts.”

So what does Don say to the “brotherhood” he is leaving behind?: “Our department is a very, very good department; we have great leadership. They’re in good hands. I am ready to be a little more selfish and concentrate on my wife and I. It’s our time now. The guys hired in the last four years have proven themselves. They’ve done everything we’ve asked. It’s kind of nice to know it is better now than when I came on. It is a sense of pride to see how far we’ve come.”

Coastal Breeze asked Don, if you had one thing to say to this “firefighting family” what would it be?: “To the young guys, I would say, be humble, be respectful and be appreciative. Enjoy what we have right now. The guys that went before you went through a lot of stuff you don’t have to go through. We paved the way, and now, you have to make it better for the guys coming in behind you. For everyone else, we sure had fun! When you come to work at this fire department, when you enjoy coming to work and you want to be here, it just doesn’t get any better than this! The camaraderie, the fun; we have a blast. We do our job; we watch out for each other; but we also have fun. We see devastation, injuries, fires, but if you can’t be happy to be here with these guys, then it probably isn’t the career for you. Enjoy it; be respectful. We really busted our tail to get where we are now.”

Last year, Don was honored with the prestigious Firefighter of the Year award. Don also was recognized with a Proclamation honoring his 30 years of service at a recent City Council meeting. On behalf of our readers, Coastal Breeze News salutes you, Division Chief Jones!