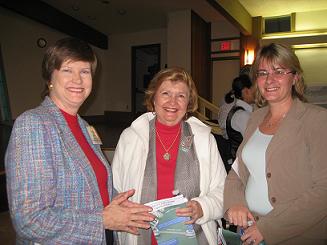 When the Department of Transportation (DOT) is involved in major construction within a community, reaching out to the public is typical, said Debbie Tower, information director for DOT.

The Marco Island community was invited to an open house January 13 for a show and tell hosted by DOT at the United Church on Barfield Dr.  Approximately 230 people showed up to look, listen, and ask questions regarding the Judge S.S. Jolley Bridge Capacity Project. The public meeting in the church hall was organized into the various project categories and each venue was manned by members of the project team. Tower mentioned, “Public involvement and public information is a priority for DOT when large projects and the associated construction affect communities.”

Information included blueprints, brochures, and pictures by the design/build team, FIGG and Johnson Brothers, and showed how the new parallel span, 20 feet west of the existing bridge will look. The new bridge will include two 12-foot travel lanes, a 10-foot outside shoulder, a six-foot inside shoulder and an eight-foot sidewalk on the west side.  Northbound traffic will continue on the existing bridge, while traffic southbound will be traveling on the newly-constructed bridge.

Councilman Wayne Waldack, along with many attendees, voiced his pleasure in the design.  The one reoccurring item which caused concern was the 42” barrier wall along the edge of the new bridge.  The existing bridge has a 36” barrier wall.  On top of that 42” barrier will be constructed a one foot pedestrian railing which does include visibility to the river and beyond.  The concern was that people driving south would not have a view of the Island as they approached. Tower was aware of the concern and agreed that there are alternatives. However, in this project, as in all projects, particular criteria need to be met.  Tower said safety, cost, time frame, design standards and specs determined the decision of retaining the 42” height.

The $25.5 million dollars responsible for building this long-awaited four-lane bridge is coming from The American Recovery and Reinvestment Act (the Stimulus Package).  Director of Collier County Metropolitan Planning Organization (MPO), Phillip Tindall, noted his appreciation for the work of the Federal Department of Transportation (FDOT) in directing this money toward Marco Island when the list of potential recipients was long.   Projects initiated by the Stimulus Package must be completed by March 2012.  The Judge S.S. Jolley Bridge Capacity Project is expected to be finished by March 2011.