Join Me On the Bridge 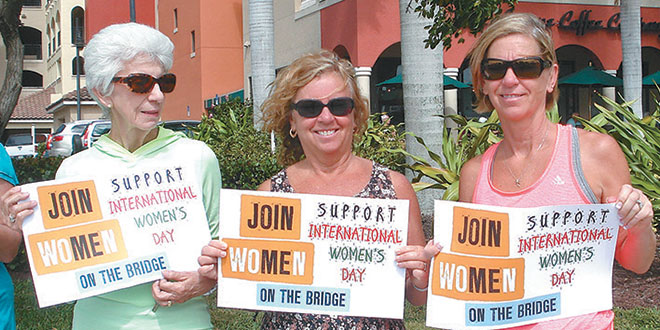 Marco’s Women For Women ask cars to honk in honor of women.

On Marco Island, it began as a simple email circulated among several women, an invitation to meet on a bridge. But its roots began in a world far away from our tropical paradise. In 2010, on a bridge connecting war torn Rwanda and the Democratic Republic of the Congo, women crossed from the opposing sides and joined together to protest the atrocities of war in a plea for peace. It became a global movement through Women For Women International’s “Join Me On the Bridge” campaign. In celebration of International Women’s Day, March 8, the campaign is a demonstrative effort to stand in solidarity with women around the world who are touched by war.

International Women’s Day began in the early 1900s. It is a day of global recognition celebrating the social, economic, cultural and political achievements of women. Women For Women International is an

Women of Marco Island assembled in front of the Esplanade before ascending the bridge. PHOTOS BY MAUREEN CHODABA

organization that supports women living in countries affected by conflict and war. This support includes teaching them how to earn and save money, improve their health and wellbeing, influence decisions in their homes and communities, and connect to networks for support.

Marco Island resident, Beth Arena, sent out that email, organizing the local event. While living in Saudi Arabia, Arena was a member of the American Women of the Eastern Province, a club that is a part of FAWCO, the Federation of American Women’s Clubs Overseas. This international network of independent clubs, serving as a support network for women living overseas, has been empowering women worldwide since 1931. Arena is now a member of FAUSA, the alumnae branch of the federation. It is through her involvement with these groups that Arena became aware of the Join Me On the Bridge campaign. 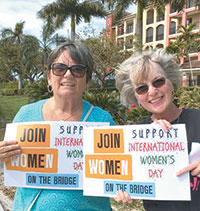 PHOTO BY MITZI METCALFBeth Arena and Maureen Chodaba at the base of the Herb Savage Bridge.

about 25 Marco Island women assembled in front of the Esplanade and made their ascent to the crest of the Herb Savage Bridge. On that picture perfect day, one could not help but bask in the beauty of our island and realize how truly blessed and privileged we are to live here. But also on that day, this group of women forged a connection with the world as they stood in solidarity with women everywhere in the spirit of “Join Me On the Bridge.” Carrying signs that said “Women For Women,” and “Honk For Women’s Rights,” they gathered much attention and many honking horns as the steady traffic crossed the bay. In my head I couldn’t help but hear the sound of lyrics from a song of my youth, “All we are saying is give peace a chance!”

All we are saying is “Give peace a chance!” PHOTO BY PHIL CHODABA

Some women, members of the Marco chapter of AAUW, the American Association of University Women, went on to attend a luncheon at the Hideaway Beach Clubhouse in honor of International Women’s Day. Local artist Laura Wright, who participated in the event, said, “Next year I hope we have enough women to fill both sides of the bridge!”

I left the bridge that day with deep pride in being a woman. The sun, glistening on the water of Smokehouse Bay, reminded me of the power, the strength, and the healing energy of our universe. It is the same sun that shines down on each and every part of our Earth, proving that we really are all connected. Women are givers of birth and nurturers of life. Together, with the men we love and who love us, we can strive for peace. With hope, love, and determination, we can create a new world!