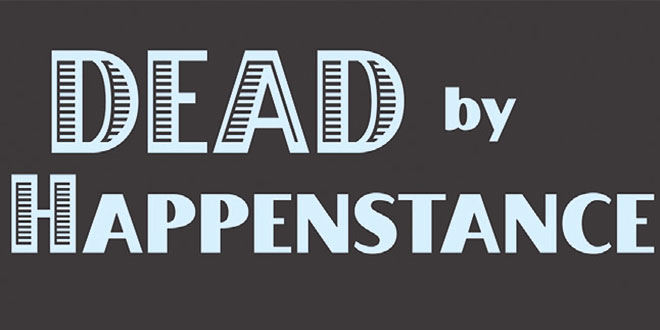 In the past, author John Dandola has set one mystery novel on Marco Island (A Beckoning Wind) and soaked up atmosphere to write another (Dead in Small Doses). His latest, Dead by Happenstance, was written entirely during his last annual stay here.

“My wife and I have had to put off relocating to Marco solely because of an elderly relative for whom we are caregivers. As is known to everyone who has been involved with such things, that doesn’t leave a lot of time to oneself. I used research as a respite because it can be done in spurts. When we finally got an extended break last year and made our way back to Marco, it allowed me to pull together all of my notes and write.”

It was an experiment Dandola has long wanted to undertake since he has always been influenced by his surroundings.

“I’ve written scenes and snippets while on Marco but never an entire book. I desperately needed to know if I could feel comfortable enough to do that,” he explains. “I can write at home in the Northeast because I grew up there. But I can’t write while in Manhattan because I have no sense of serenity. People tell me they thrive in the ‘beat and rhythm of the city,’ but it causes me to lose all concentration — no matter where you are or how high up, it’s noisy and unfriendly. I can’t write in Los Angeles unless I shutter myself in because I find it oppressive. Peers often turn projects into a contest of who’s ahead of whom. Even the pizza delivery guy is struggling to get into show business and that weighs on me. I can’t offer help or suggestions, and it all becomes burdensome unless I become a hermit. On Marco, just like at home, I found that I can work at my own pace, and I’m left alone in peace and quiet. That’s priceless. What’s more, there’s the beach where I’ve always found it easy to become mesmerized and conjure up or work out storylines.”

Dead by Happenstance is the fifth in Dandola’s 1940s mysteries with a Hollywood hook featuring a sometime-show business bodyguard. The author’s vast knowledge of vintage movie-making and the inner-workings of the Studio System are things to be savored by film buffs. Here is it’s synopsis:

As the summer of 1943 begins, M.G.M. publicity chief Howard Dietz brokers a deal for Tony Del Plato to work again with Paramount Pictures. The job comes as a direct request from cinematographer Steve Hardin. Their assignment takes them to the Mayan ruins of Mexico’s Yucatan Peninsula, where Hardin is to film second-unit footage for a B-movie. All goes smoothly enough until the actors’ stunt-doubles arrive and an inexplicable murder takes place. Once again helping to unravel the motive is Paramount actress Marjorie Reynolds, who had hoped for a vacation simply relaxing and spending time with Tony.

Why set a series of novels during the 1940’s, an era before the 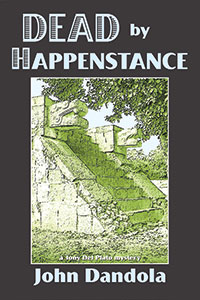 author was born? “You mean besides the fact that I find 40s dames fascinating?” quips Dandola. “I thoroughly enjoy writing about them. But actually that would have probably never have come about if the time-frame hadn’t been dictated for me by an event which happened in my hometown.”

Dandola’s mystery series began as a stand-alone novel entitled Dead at the Box Office. That storyline used as a backdrop the World Premiere of M.G.M.’s “Edison, the Man,” which actually took place in his hometown of West Orange, NJ, during May of 1940. Edison’s home, laboratory, and factories were in West Orange.

Dandola is the only one who has ever pieced together all the events which took place for the multiple days of celebration. Although the local newspaper reports tended not only to be hyperbolic but contradictory, he managed to reconstruct everything with the assistance of now-deceased Hollywood participants and now-deceased local participants along with official studio memos. The whole premise for that book was kicked off by several meetings the author had with none other than Orson Welles. As a young screenwriter, Dandola was already known for his expertise about classic movies and he was asked to accompany an interviewer during one of Welles’ late-in-life tours to raise money to complete an independent film project. Welles grew tired of the interviewer, but he clicked with Dandola and invited him back for more discussions. He became fascinated with the depth of Dandola’s roots in one place and that Dandola’s grandfather had been a personal messenger boy for Edison and a friend of the youngest Edison son.

He reminisces: ”[Welles] actually began pumping me for information. He was surprised I shot films in my hometown and the surrounding countryside; some of them costume pieces. That was long before the current technology made it easy to do. We compared notes on the trials and tribulations of that. But most of all, I can still hear him saying, ‘Your family has been in one place for that long?…And you have a connection to Thomas Edison to boot?…You’ve got to promise me you’ll do something with all that as a background for a story at the very least.’ Several years later, during a screenwriters’ strike, I gave it a try as a mystery novel. It was successful.”

That success not only included a step up to a larger publisher but continual interest in the screen rights by a variety of movie producers. Every time a novel debuts, Hollywood nibbles. There even have been scripts written and locations scouted but so far nothing has made it onto the screen. Yet, Dandola is unchanged by any of it, and he is content in his surroundings, working long-distance on a variety of writing assignments.

Dead by Happenstance is published by Compass Point Mysteries (326 pages, $15.95) and is available online directly from the publisher at www.QuincannonGroup.com/DelPlatoMysteries.html.

John Dandola holds professional credentials as a novelist, screenwriter, playwright and historian. He frequently lectures and teaches. He also has worked very closely with regional museums, writing everything from formal histories and biographies to guidebooks and historical fiction.