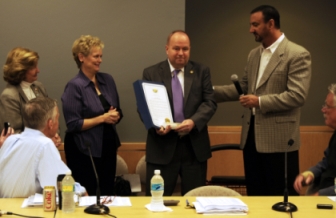 Retired County Manager Jim Mudd was given a standing ovation when presented with a Proclamation and Key to the City, following his retirement for health concerns in October 2009. Mr. Mudd is flanked by County Commissioner Dona Fiala, Toni Mudd, and Marco City Council Chairman Rob Popoff. Photo by John Torre.

Following his retirement in October 2009, Collier County Manager Jim Mudd was presented with a Proclamation by the Marco Island City Council to recognize his outstanding service both to the City and to the County.

Mr. Mudd’s wife Toni was present at the ceremony.