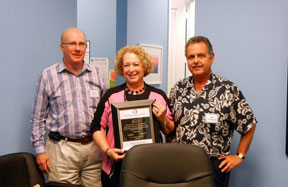 The Jewish Family and Community Services (JFCS) of Southwest Florida recently received a national award for its “Seder-in-a-Box” program from the Association of Jewish Family and Children Agencies (JFCA). The award was recently accepted at the annual JFCA conference in Houston.

“Seder-in-a-Box” is a collaborative effort among JFCS of SW Florida, a non-sectarian human services agency and four congregations in Naples and Marco Island: Jewish Congregation of Marco Island (JCMI), Beth Tikvah Congregation, Naples Jewish Congregation and Temple Shalom. First implemented for Passover 2011 and generously supported by Publix at The Strand, the “Seder-in-a-Box” provided kosher for Passover meals to 100 Jewish households in Collier that received support from the JFCS financial assistance and food pantry.

“It is difficult to find words to express how JFCS has helped me. You are the key to surviving,” one of the recipients, an unemployed father of three, was quoted in a release from JFCS. “The Passover gift box was phenomenal. We would not have had a proper Passover without it.” Harvey Brenner and Bert Thompson of JCMI were presented with a replica of the national award for their participation in this rewarding project to feed the needy. The plaque was presented by Dr. Jaclynn Faffer, Director of JFCS.