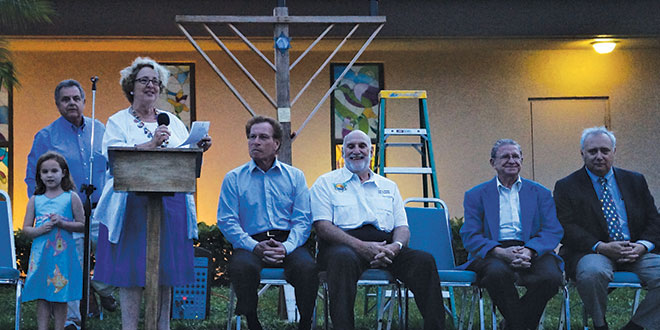 The first night of Chanukah began on Sunday, December 6, with a community candle lighting ceremony at the Jewish Congregation of Marco Island (JCMI).

As the sun went down, a crowd at the JCMI was led by Cantorial soloist Hari Jacobsen in a holiday prayer and celebration, complete with songs. JCMI member Bert Thompson’s young granddaughter Abigail Quartararo sang a Chanukah song to the delight of the guests. Following the candle lighting, refreshments were served in the social hall.

Each year Chanukah begins on the 25th day of Kislev, according to the Hebrew calendar, or sometime between late November and late December. Chanukah commemorates the 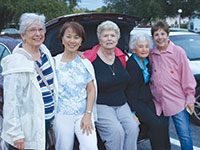 Ladies at the JCMI waiting for the candle lighting.

ancient Israelite victory over the Syrian Greek army, and the subsequent miracle of restoring the menorah in Jerusalem’s Holy Temple.

The miracle of Chanukah is that one vial of oil (with just enough oil for one day) lasted for eight full days. Oil was needed for the menorah in the Holy Temple, which was required to burn throughout the night, every night. After the miracle, Jewish sages declared an eight-day festival.

During Chanukah, a candelabra called a menorah is lit in the evening, and prayers are said. Each night the number of candles is increased by one. An extra candle, called a shamash, is also lit each night, and 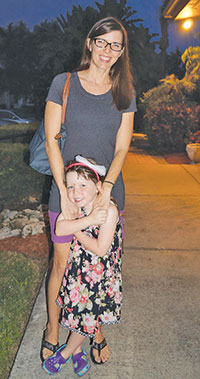 Andrea Murphy with her daughter O’Hara on the first night of Chanukah at the JCMI.

is given a distinct location from the other candles (usually higher, lower or to the side). On the first night of Chanukah, two candles (including the shamash) are lit, on the second night three candles are lit, and so on, ending with nine candles on the last night.

Many Chanukah foods are deep-fried in oil, symbolizing the oil from the menorah used in the Temple. These include potato pancakes called latkes, and jelly doughnuts. Children play games like spinning a dreidel, and they receive chocolate coins called gelt. Many families exchange small gifts each night.

For more information about the Jewish Congregation of Marco Island, call 239-642-0800 or visit their website at www.marcojcmi.com.