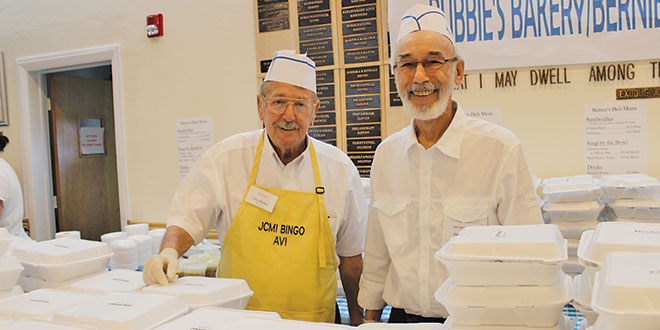 Volunteers Abbe Hankin (left) and Ted Bunten smile as they pose behind a mountain of pastrami and corned beef sandwiches they helped distribute. PHOTOS BY SAMANTHA HUSTED

On January 24th the Jewish Congregation of Marco Island (JCMI) celebrated their third annual Jewish Deli Fest. Thousands of eager, and hungry, people showed up Sunday morning to celebrate the occasion by feasting on the delicious kosher-style dishes.

The synagogue was packed with rows of long tables, good smells and a whole lot of food.

Patrons were divided into two long lines that spilled out into the parking lot and along the side of the building. One line was for eating in and the other for taking out. Once inside the line twisted and turned in an organized, theme park-like fashion, allowing volunteers and guests easy mobility in the very crowded space. JCMI was without a doubt the most popular

Bert Thompson of Bernie’s Deli helped package to-go items for visitors. He says that over 2,400 sandwiches were distributed.

eatery on Marco Island that morning.

Finally, after the long wait, Deli Fest goers were directed to make their way along the sweets table. There they had the option of delicious strudel, rugelach, mandelbrodt, and a variety of cookies and cheesecakes all homemade by the JCMI Sisterhood members of Bubbie’s Bakery. Bubbie is Yiddish for grandma. The recipes the women of Bubbie’s Bakery employed have been in their families for generations and were handed down to them by their own grandmothers, making their sweets that much sweeter.

After diving into the baked goods, patrons were then given the option of either corned beef or pastrami sandwiches, served with a pickle, spicy mustard, coleslaw and potato chips. On the menu for soup was

The line was so long that it spilled out of the building and into the parking lot. While the line seemed intimidating, JCMI functioned like a well-oiled machine, efficient and timely.

With trays of food in hand people made their way to the tables and sat were they could find a seat, joining friends, family and strangers alike in the communal act of eating.

“We’re extremely happy with the community coming out to celebrate the Deli Fest,” said Bert Thompson of Bernie’s Deli as he helped package to-go items. “We’re just delighted to serve everybody in our community.”

And by everybody he means everybody. That day over 2,400 sandwiches, 1,000 take-out soups and over 1,000 eat-in soups were served. In addition to those numbers, thousands of homemade bakery items were swept up. Everyone who came out that day left satisfied and really, really full.