Jane Watt, In Her Own Words 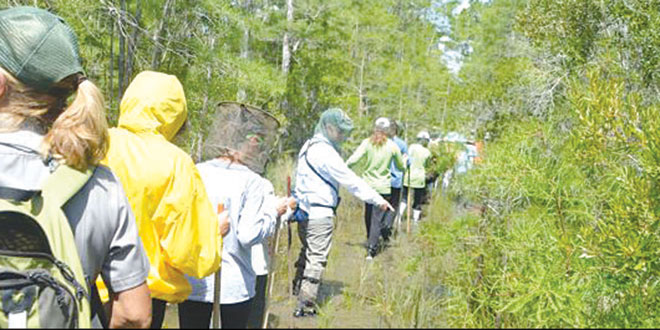 The students headed out en masse to Big Cypress, and they came prepared with mosquito nets.

Jane Watt is many things.

She is a mom, a wife, a daughter, a friend, a former pharmaceutical sales representative, an educated woman with a degree in zoology and a graduate of Miami University in Oxford, Ohio. As the founder and chairperson of Marco Island Academy (MIA) — the local public charter high school — she also is a woman from a small Midwestern town who moved to Southwest Florida and succeeded in bringing high-quality secondary education to Marco Island and its surrounding communities, and she did it with no background in education.

Watt details the six-year journey (the good, the bad and the ugly) of conceptualizing MIA to making it a reality to realizing the school’s accreditation and the school receiving an “A” grade by the state of Florida in her new book, “Fighting For Kids: Battles to Create a Public Charter School.”

The book is set for release Feb. 28 and is 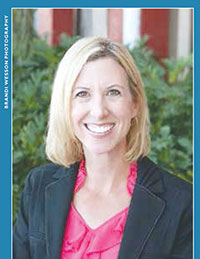 available for pre-order now on amazon.com. A portion of the proceeds will go to help fund MIA. Some 200 copies already have been pre-ordered.

“We had every reason to fail and only one to succeed,” says Watt. “There were a lot of people who believed in me when they had no reason to. They believed in the mission and the vision, and I am so thankful for that…I’ve had a lot of people ask me, ‘How did you do this?’, and I joke that I outlasted everyone that was against it. But, the truth is that it wasn’t me. It was everyone including the volunteers, parents, faculty and community members on the MIA Team who made it possible.”

Watt credits Marco Island resident Wade Keller and founding MIA Board Member Gayle Thawley for inspiring and encouraging her to write the book, which began taking shape in November 2012. “I was approached by Wade, and he said, ‘I feel like you have a story, and

I would love for you to tell it,’” Watt remembers. “I was a little reluctant at first, but I started meeting with him about different things that happened over time. We tape recorded the interviews and wrote it from there. With Gayle’s help, we edited it about 100 times.”

To be sure, Watt’s reluctance was born out of the controversy and adversity that surrounded the founding of the school, obtaining its charter and locating a parcel of land on which to build it. She discusses all of this in the book.

“I tell everything in the book,” she notes. “It is from my perspective. I shared things I have never told people before.”

The road to MIA began when Watt and her husband, Jim, moved to Marco Island 10 years ago from Ohio. With young children in tow, she immediately began looking at the schools in the area. “When we first looked at Marco, we saw it had a good elementary and good middle school.

At the time, the high school zoned for our kids was D-rated. I looked at all of the public high schools in Collier County, and I wasn’t happy with any of them…People just accepted it, but I felt we ought to do better for our kids,” explains Watt.

She definitely knew a private school wasn’t the answer: “My kids would end up going to a school in a different community. Why would it be okay for my kids to get a more individualized education? What happens to all of the other kids? All of these kids deserve a better education. They all deserve an equal opportunity for success…How can we better serve our children?”

From that point on, Watt says, the issue became so much bigger than her own children. “It is all about the kids,” she adds. “That is one of the key ingredients that has driven the success of the program. The most important thing is that the focus remains on the

Faculty, staff and members of the class of 2014 prepare for the MIA’s first-ever graduation ceremony, which was held at the Marco Island Marriott Beach Resort. PHOTO BY NOELLE H. LOWERY

kids. Whatever the decision, it is about what is best for the kids.”

Enter the charter school idea, and to say that Watt experienced push back from the local population and Collier County Public Schools is an understatement. In her book, Watt describes a number of struggles she encountered, including the lack of support she received from the school district administration in securing a charter for MIA; the fight over Tract K; the search for a school site which encompassed 17 different parcels of land; and the community backlash and loss of a close friend over the issues.

Then there are the personal attacks, one of which ended up with Watt filing a police report. “Some people didn’t like the fact that I was trying to do something different,” she remembers. “I was trying to offer parents and students another option, and it was not fair to block a choice. I was really caught off guard when there was push back. To try to

block someone else’s choice, it just didn’t make sense to me.”

In the end, though, Watt is oddly thankful for the hardships: “It forced me to reach out for help, and I have met some truly incredible people along the way…There are such amazing stories of generosity on this island, about people who took a chance and helped (MIA) succeed. I am very fortunate to be in a community that is very giving and that sees the value of high quality education.”

Some of those individuals include Thawley, Rene and Tish Champagne, Tim Truesdell, Marco Island Marriott General Manager Rick Medwedeff, Morgan Stanley’s Terry McCreanor, Bill and Karen Young, and Vickie Marble with the Florida Consortium of Public Charter Schools as well as many others, some who have chosen to remain anonymous. 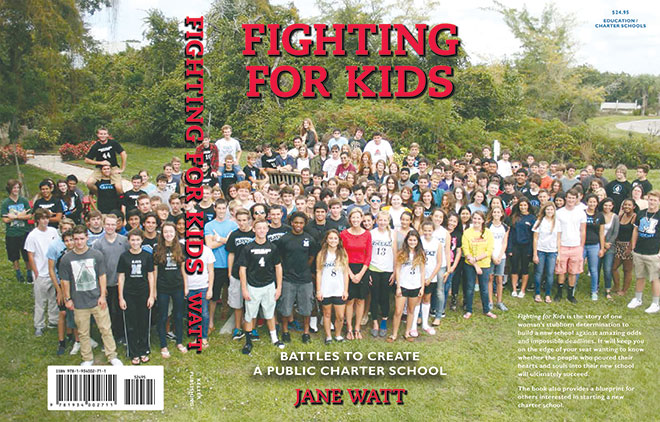 decisions that will impact the future of MIA.

“Even though my issues were specific to this island and community, whenever someone is trying to institute change there is going to be resistance,” she admits. “I feel there are people all across the country who feel like I did. If you are passionate about your child’s education, you can take steps to help improve the opportunities. If I can do it, you can do it.”

“‘Fighting for Kids’ is a moving story that I hope encourages more people around the nation to follow Jane’s example by challenging the status quo and fighting to improve and expand educational options for American families.”
— Former Florida Gov. Jeb Bush

“The right person at the right time for the right cause is Jane Watt’s ‘Fighting for Kids,’ an incredible story of how one person with vision, passion, and perseverance could ignite a community to support the best possible education for their kids.”
— Rick Medwedeff, General Manager, Marco Island Marriott Beach Resort