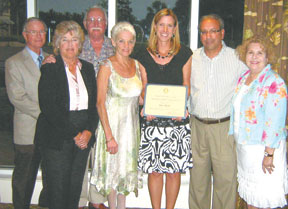 Watt, along with previously announced winners Mac Chaudhry, Dennis & Joan Pidherny, Jani Subczynski, and Craig & Bonnie Woodward, will all be formally presented with their 2012 Spirit of Marco Island Award at a Gala Awards Dinner and Silent Auction to be held on Friday April 13, 2012 at the San Marco Catholic Church Parish Hall. Lee Rubenstein, also a 2012 Spirit award recipient, will receive his formal award at an upcoming Rotary luncheon.

The proceeds from the event and silent auction are used to support local charities and scholarships. For more information and tickets for this event you may contact Al Diaz at 438-5285 or by email at royalmarcoway@marcocable.com