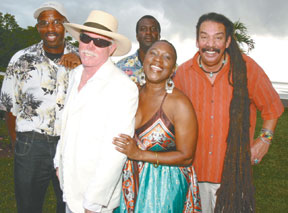 So…It’s Friday morning…wake up, get the Keurig goin’ with a hot cup o’ joe, unfold the laptop, double click on Safari, and punch in “JRobert.” Now this is not how we usually do things here at Music Notes Central, (my kitchen counter), but let’s try something different. Of course, we will chat with this week’s local legend in person, but I’m running with this for a minute.

OK…so…type in “JRobert,” and the very first thing that pops up reads: “Marco Island, Florida entertainer presents a tropical variety steel pan & fiddle show” and a link to JRobert.net. I also see here a wedding videographer from Vancouver that shares the same name, and most notably, a Wikipedia link to “JRobert Oppenheimer,” an American theoretical physicist and professor of physics at the University of California. Where are we going here? Sorry, back to the professor at hand. Marco Island’s own, Dr. Fiddle, who has his PhD in “island music.” So, click goes the link, and I see… “A Musical Voyage,” and hear a well played tune, with a little harmonica (gotta love it!), a great groove and lyrics that hit home. “A pelican floats, to the deck of my boat, I feed him, he’s got me well trained/ a few friends appear, with a six pack of beer, welcome to life in the bicycle lane.” -from his new CD, “Steel Away.” Scroll down the website and see: “Fourth generation Floridian who loves…beaches, mornings, reggae, jazz, soca, sailing, Gulf of Mexico, pool, blue water, wild world, boats, cocktails, conch shells, mangrove moon, and MARCO ISLAND, FLORIDA!” The site has a great look to it and it’s easy to navigate (always good for compu-illiterates like me).

Navigating further into the home page, I noticed 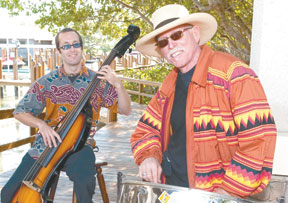 JRobert and his son, Martin Houghtaling, perform at the Marriott’s Crystal Shores every Tuesday afternoon from 12:30 to 3:30 PM. PHOTO COURTESY OF ELAINE RICHIE

a tab titled “Captains Log.” Couldn’t hurt to click on it…as it led me to be journal entries) dated, and arranged in a timeline. It turns out to be somewhat of a “musical diary.” Originally the plan was to skim through a few stories, but after the first one with great tales of sailing, playing music and fishing…I WAS HOOKED! One after the next. Great stories. Anyone with interest in sailing, fishing, island life, or music, will enjoy. In fact, after the last entry was over, I was left wanting to read more. Hopefully these stories will stay up to date on all his adventures.

“Its more than just music, it’s a lifestyle”, says the self proclaimed “Tropi-cowboy.” “I came to the island in 1986, from Ruskin, Florida. I’m the son of a son of a Florida farmer, who loves to sail!” Nowadays, JRobert’s son, Martin Houghtaling, can be heard playing alongside, with an upright bass. “We make fun music for fun people.”

Coastal Breeze has been quoted saying, “His music puts the finishing touch on the tropical atmosphere.” WMNF/Tampa radio DJ, Pete Gallagher, calls the master fiddler, “Florida’s own string wizard, One of folk music’s truly elite performers.” Wherever he travels, he’s always “the best fiddler under the mangroves.” A composer, an entertainer, a multi-instrumentalist, and a gentleman who shares my love for our great state of Florida, not to mention a mentor, a musical hero and friend of mine. Our experiences together have ended us in the recording studio a few times. He not only played fiddle on multiple Gator Nate & The Gladezmen albums, he has been a “go-to” over the years for everything from producing and engineering, to giving sound advice to a young band. Always a true professional.

At The Marco Island Yacht Club with the Jolley Bridge in the background. PHOTO COURTESY OF BILL HUGHES

performer.” Nashville ain’t got nuthin’ on him! If you haven’t gone to see a live show, do yourself a favor…check it out! He can be seen performing at Crystal Shores every Tuesday afternoon 12:30 till 3:30 PM. “It’s a great gig!” The GM, Patrick Botwright, has offered a “lifetime contract” for JRobert and his son, Martin, to play “island style” music every week. “Jimmy Buffett’s song, “I Wish Lunch Could Last Forever,” is perfect there, because when Marco residents and businessmen take a little lunch break with us, it reminds them of why they love the island so much!”

JRobert can often be seen sharing the stage with local musicians, Sabrina, Frank Carroll, Rayford Starke, The Wholetones and The Gladezmen. Over the years, he has played at Quinn’s on the Beach, the Snook Inn, Stan’s Idle Hour, and the Little Bar, although these days it’s mostly corporate, private, and wedding events. JRobert has, for over 20 years, been a big supporter of St. Petersburg and Miami Children’s Hospitals as well as other charities, by donating his time and music.

If you want the scoop on all his musical doings, head over to: JRobert.net, FloridaFusionMusic.com or MangroveMusicStudios.com. If you would like to hear the stuff we did together in the studio, go to iTunes- Gladezmen/Scallium Anarchs. If all goes as planned, we’ll be back next “tweek” with more “Jammin!” AUDIOS!

Nate Augustus is a native “Florida cracker” and a singer/songwriter from the Marco/Naples area. His band, “Gator Nate & The Gladezmen” and his “One-Man-Band” can be seen at many local venues. He has released multiple albums on his record label “SwampSong”. For more info on Nate and his musical doings, go to www.Gladezmen.com or facebook.com/NateAugustus His latest CD “Gator Nate Augustus-Only Child Family Band” is available on CDBaby and Itunes.