Jack Grout: A Legacy In Golf 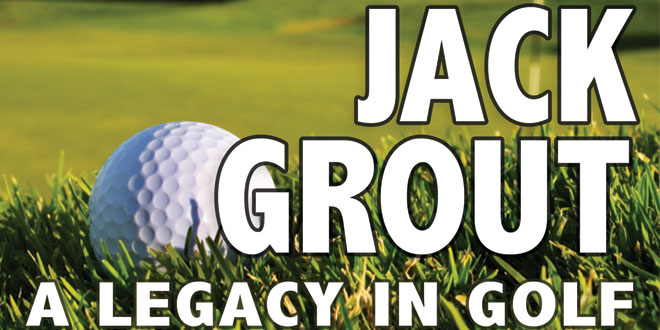 As a non-golfer, I was attracted to the biographical aspect of this book. What I found was essentially a history of competitive professional golf in the US disguised as the story of one man’s life.

I knew the meaning of eagle, bogey, birdie and par before I read this book but not much else. Now I know fade and draw, understand a bit about how integral the golf course design is to the players’ enjoyment of the game, and of course, the clubs. Per Jack Grout, “Just like there are no gimmicks in the swing, there are no magic clubs. Some clubs are better suited for your size, your strength and your game than others. Find them and stick with them.”

The evolution of golf clubs was particularly interesting to me. When Jack Grout discovered golf at the tender age of eight, in 1918, and started his caddie training, clubs were named, not numbered. It must have been challenging for a child to learn lofter, niblick, jigger, putter, cleek, baffy, driver, brassie, mashie, mid-mashie, mashie-iron, spade-mashie and mashie niblick. However, he immersed himself in the terminology, golf etiquette and other aspects of caddiedom well enough that he was assigned a loop by the end of his first week.  Yes, an eight-year-old caddie! Apparently most of the golfers had rather lightweight bags in those days with about six or seven wood-shaft clubs in them, so jobbing as a caddie was a viable opportunity for young boys. As a matter of fact, when 20-year-old Francis Ouimet became the first American to win the US Open in 1913 (it had been dominated by Europeans from 1895 through 1912), his caddie was ten years old!

Jack’s caddie earnings were proudly turned over to his mother to be used for expenses incurred by the large Grout family which included five boys and three girls. This innate sense of responsibility and willingness to share even at the tender age of eight reveals the core integrity of 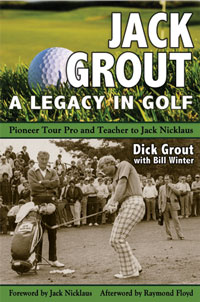 Jack Grout. His sterling character would shine through in his personal and professional relationships throughout his 79 years.

He stumbled into the golf world purely out of curiosity when he trailed his older brothers to see where they spent their days. Duane and Dick Grout had been caddying at Oklahoma City Golf and Country Club since shortly after Ouimet’s 1913 victory at the US Open. His win engendered a huge interest in the game and “Americanized” it. It was no longer assumed that the European pros would dominate. Over the next decade, the number of courses both public and country club mushroomed as did the number of the players and competitions. The oldest Grout boys established the family’s participation in this game which continues to this day. Dick and Jack Grout would spend their lives in golf as does Jack’s son Dick today.

Jack Grout also stumbled into personal happiness when he first laid eyes on the aptly named Bonnie Fox. In Florida, at a 1940 winter tournament, a night out with businessman and fellow golfer Ed Bradley and his wife Vera, Jack was introduced to Vera’s youngest sister Bonnie, then 19 years old, visiting from Saint Louis and babysitting for her two young nieces that night. Jack’s heart took Cupid’s arrow through and through, but the arrow sort of deflected off Bonnie. It would take two years of wooing, mostly through letters, (long distance was difficult and expensive back then and not all residences had telephones) before the vivacious Bonnie, on the cusp of womanhood but still delighting in her carefree single life, consented to become Mrs. Jack Grout in 1942.

A few chapters of the book are sprinkled with excerpts from Jack’s letters to Bonnie. There are none from Bonnie to Jack because unlike Bonnie, who saved all Jack’s letters, he burned all of hers after he read them to preserve privacy.  Jack’s patience and persistence paid off hugely, however, as the Grouts had two sons, two daughters and many moves and adventures together as they shared 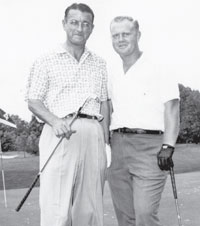 Jack Grout and his most famous student, Jack Nicklaus.

a deepening devotion over the next 47 years. If you read this book, I would urge you to remember that the gender roles were more clearly delineated back in the 1940s, and do not let the attitudes of 2013 color the communication between Bonnie and Jack.

When I started this book, I was interested in a good biography, learning about the qualities of a man who was the only golf instructor used by Jack Nicklaus for the first 39 years of his career. I discovered that Jack Grout’s contribution to American golf is inestimable. From age eight when he carried that white bag around his first loop to his deathbed final golf lesson to Nicklaus in 1989, Jack Grout was all about love of the game and perfecting the fundamentals. The fact that this book is introduced by a tribute from Jack Nicklaus and closed with a tribute from Raymond Floyd testifies to the influence he had on the game. The book reads like a “Who’s Who” in golf in recounting the players both pro and amateur influenced by Jack Grout.

Just under 300 pages, Jack Grout: A Legacy In Golf, is a valuable contribution to the history of golf as well as being a personalized account of the subject’s life. If you are ready to go back to a simpler, although not necessarily easier, time when life seemed sweeter and certainly was slower, settle in with this book. Meet Jack Grout and travel along with him as he discovers a passion for golf, forges lifetime friendships with the likes of Byron Nelson and Ben Hogan, when they were young and so was the game of golf. They were in it for the love of it and in following the tours, they helped each other out with the winners sharing the paltry sums with everyone, and had a rollicking good time along the way.  A different world, indeed.

(Interestingly, Dick Grout’s co-author Bill Winter is a local resident – “about a driver and two 3-irons from the Jolley Bridge,” over in Hammock Bay.)