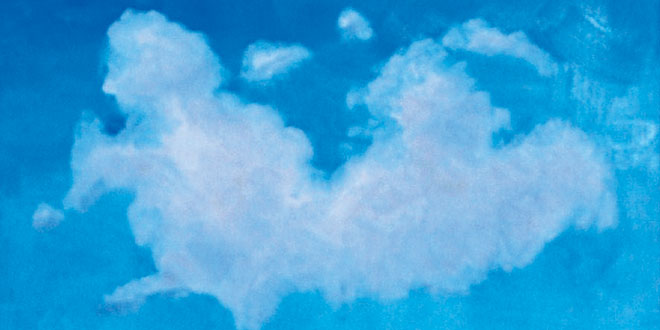 A dear friend and fellow artist was visiting from Europe last week, and it was delicious to fill so many conversations with artful topics. After visiting my home gallery, she was moved by a collection of cloud paintings of mine and shared her thoughts about the rising popularity of clouds as subject matter in western art.

Was it a rising trend? I had not heard. (Growing up in flat-as-the-ocean Florida, clouds have always seemed a natural obsession.) Tell me more.

She named several European artists, well-known and obscure, who are now dedicating yards and yards of canvas to representations of those lofty puffballs. She told me of her own recent passion for photographing clouds everywhere she goes.

Now that she brought the subject up, I too could think of several American artists who were turning their talents to representations of atmospheric delights. I even knew of a recent event in Portland, Maine, where six artists combined to create an exhibit called “The Sky’s the Limit,” which was, you guessed it, all about clouds. This was getting interesting.

Of course, my friend was asking the big “Why?” A movement of collective consciousness among people who have never met is pretty heady stuff. Her first theory involved climate change, that, due to changes in our atmosphere, clouds might actually be different now than, say, 200 or 300 or 400 years ago, and consequently more interesting to artists. Hmmm. Wasn’t vaulting onto that wagon too quickly.

“But,” I replied, “if you look at older paintings, the clouds all look the same as they do today; they’re just not the focal point of the composition.”

Ah, she built her second theory (still wrapped around the first). Why weren’t they the focal point? Perhaps the world’s heightened awareness of climate changes has made artists more sensitive to what’s overhead.

Not an impossible answer to why artists of the western world may be examining nimbus, cumulous, cirrus and other vaporous wonders. Many artists are deeply inspired by events o’ the day, but in answering the question as to why clouds were not historically the star feature of compositions, we had to agree that 600 years ago painters were primarily patronized by the church. Saints and biblical allegories were the rage of the day.

A few centuries later Northern Europe, in a spate of prosperity, was reinventing western art through the patronage of wealthy merchants and their guilds; portraiture and bountiful still-lifes flourished. Through it all was also the patronage of nobility, and we know who starred in those paintings. It’s only been a little over 100 years that so many artists have been able to present themselves independently to the art-buying public, with subjects and techniques of their choosing.

So, the question remains: If indeed there is a movement to bring more clouds onto the canvas, what is behind it? My friend’s theory is certainly viable. My thought is maybe artists who prefer to depict the natural world around them could feel that all that can be said through landscapes and seascapes — impressionism, expressionism, cubism, color-field, pixilation, etc. — has pretty much been said. Why not raise their eyes and turn their techniques to a new frontier?

Just a thought, no better or worse than my friend’s. The best part is that the subject was broached at all, the dialogue opened, ideas were aflamed. If you have any ideas, I sure would like to hear them. Creative thinking, as well as practices, are essential to human progression. What our theories may lack in research just might be their greatest attribute.