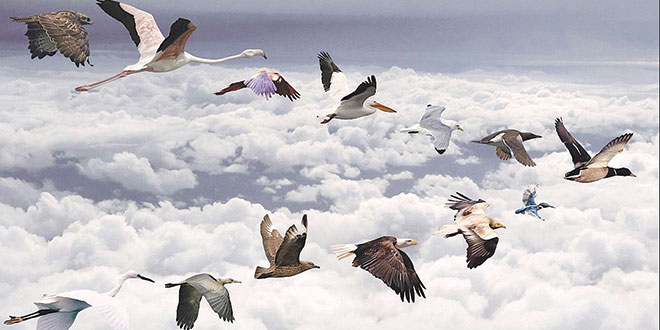 September 21, 2014, 10:29 PM Marco Island time — The Autumnal Equinox is occurring. That imaginary line on our planet called the Equator is closest to the sun. There is an even amount of solar energy in both the northern and southern hemisphere. It is the first day of fall.

Over the next few months the earth’s northern half will tilt away from the sun. Here in Florida, we will experience cooler temperatures, but further north a much colder climate will be prevalent. Some areas of the United States have already experienced snow, and that means many of our feathered friends are on the move, looking for more suitable surroundings. Some of our winter residents are on the way here as we speak.

Many birds will follow certain ancestral paths to arrive at their destination. These are called “flyways,” and there are several throughout our continent. They consist of shorelines or low-level mountains with plenty of water available. Most birds migrating south for the winter will use the Mississippi Flyway or the Atlantic Flyway.

Birds in their normal physical state cannot always survive such intense journeys. In order to prepare for such flights, they enter of period of greatly increased appetite called hyperphagia. They will accumulate a thick layer of fat to fuel their bodies during the trip, and thus convert stored sources into energy. This process, combined with the lengthy flight time, continues to amaze both scientists and bird watchers alike.

In addition to the warblers and thrushes (most notably the Robin) that visit here, many larger species find respite in the Florida sun. Some of these are of record-setting sizes and/or abilities.

Second only to the California Condor, the White Pelican boasts a wingspan that can exceed nine feet in width. They will nest in early summer in California, Utah, Canada and other Midwestern states before following the Mississippi Flyway in the fall to Louisiana, Florida and even Mexico. They have been coming here for thousands of years according to some researchers.

Here in South Florida, they have been seen often on Sanibel Island and near Everglades City. I have personally seen them on several occasions at Tigertail Beach here on Marco Island and also on sand bars at low tide in the Marco River. Whereas the local Brown Pelican only weighs about four pounds, the White Pelican can top the scales above 15 pounds. They need that large wingspan to keep such a heavy body aloft. Arriving here in late fall, they will stay until April or May before following the same path back to their home grounds.

A record setting raptor passes through our area in late fall/early winter as well. Tracked using special GPS devices, many Peregrine Falcons leaving the New England area utilize the Atlantic Flyway, along the ocean’s shoreline, on their journey south for the winter. Some come from as far away as the Arctic regions of northernmost Canada. Tracking their prey from great altitudes, the Peregrine Falcons will dive at speeds in excess of 200 miles per hour and strike prey in mid-air, killing it on impact. To survive such a dive at a great speed, it has developed special nostrils that allow it to breathe while attacking and also will secrete a substance in the eyes to keep them from drying out during the dive. This Falcon is the fastest animal on the planet!

Primarily a cliff dweller in earlier days, the loss of habitat has caused the Peregrine to utilize tall buildings as nesting areas up north. We see this bird in our immediate region in late fall and early winter. Many are just passing through the Marco area on their way to Central or South America. This past winter, I saw Peregrine Falcons under the Jolley Bridge and also in some mangrove areas around Johnson Bay.

While the White Pelicans, Peregrine Falcons and other birds migrate to our Island at this time of year, it is also time to say goodbye to another prized visitor. Arriving here in the Spring and leaving now is the Swallow-tailed Kite.

Converse to the birds of northern North America that come here to winter, the Swallow-tailed Kite makes its home south of the equator. During the spring, the Vernal Equinox, as the southern hemisphere tilts away from the sun and becomes cooler, these kites migrate to the north to enjoy the continual subtropical temperatures. They come here from great distances such as Peru and Argentina. When they arrive here in the spring, they make this their nesting area, laying eggs and rearing young. During the early days of fall, right about now, they will take flight across the western edge of Cuba and through Central America to their “winter” grounds.

Keep an eye on the sky…You may be surprised to see what’s flying overhead!

Bob is the owner of Steppingstone Ecotours and a naturalist with the Dolphin Explorer’s survey team. He is a member of Leadership Marco 2014. Bob loves his wife very much!