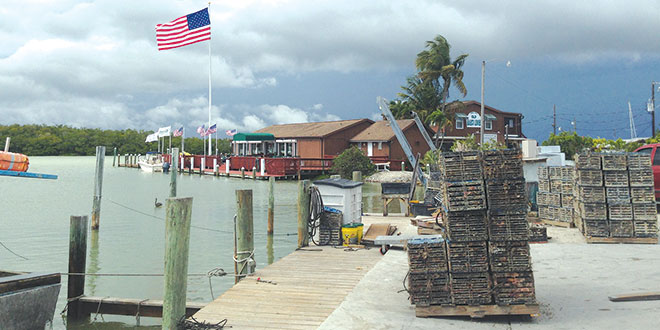 The smell of crab traps in the open air — after months of being underwater — is a tell-tale sign of the end of stone crab season in Southwest Florida.

“It’s quite pungent over there,” said Pat Kirk, the matriarch of the Kirk family and owner of Kirk’s Fish Company. Anyone living or passing by Kirk’s downwind can confirm that, as over the past month crab traps have been systematically pulled and stacked next to the store in preparation for cleaning and repair. May 15 was the last day to legally collect those delicious stone crab claws, with ten additional days allowing crabbers to pull all of their traps by May 25.

“It worked out well for us; stone crab season is

Kirk’s lot has been overtaken by the 2,500 new traps being put together for Damas to crab next season.

tourist season,” said Pat. “Our guys had a good year, but a lot of places did suffer. We did okay, but we could always do better in this business.” This season marked the Kirk family’s return to their Goodland store, after spending 17 years in Naples running Captain Kirk’s Stone Crabs and Fresh Seafood Market.

The Kirks confirmed that most of their big improvements are out of the way. Even the freshly planted grass is flourishing thanks to their recycled crab water-fertilizer. The family’s focus is now aimed at applying lessons learned this first season back in Goodland to ensure next year runs even more smoothly.

“It’s mostly wholesale that we do this time of year; and even though we’ve closed down the retail, 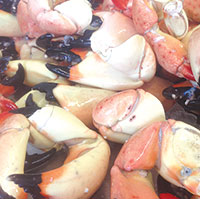 We say goodbye to stone crabs on the menu, for now.

we will gladly sell what’s in our freezer. If the door is open, just come and find us on the lot,” said Pat.

As another stone crab season closes, the folks at Kirk’s already have started the work necessary to get ready for the next season, which kicks off on October 15. The work that crabbers typically put in over the summer is grueling and expensive, which contributes to the high cost of the crabs. Keeping crabbing gear going is not only pricey, but completely out-of-pocket.

The Kirk family also has been busy with the essential preliminary work for Damas Kirk, owner and patriarch, to do some crabbing next season. They’ve put together 2,500 new traps and branded his buoys, painting them purple and

Buoys strung out and painted Damas’s colors: purple and white.

“I’m bored. I tried to get off of the water; it didn’t work, but this is a smaller boat, a smaller crew and less stress. I couldn’t handle the big numbers anymore,” said Damas.

“He calls it old-man crabbing. He’s got a little boat and has to go out on nice days,” said Pat.

“And we told him that if he catches them, he has to come in and cook them himself,” said Kelly with a laugh.