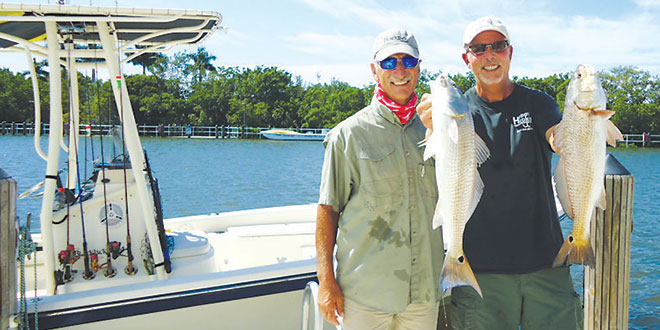 After months of anticipation, Marco Sportfishing Club’s Tenth Annual Redfish Tournament “Full of Bull,” kicked off at the Old Marco Lodge. The Old Marco Lodge not only provided great food and drink, but an inspiring backdrop for what was about to be an action packed week and a half of camaraderie, fishing, dining and prizes.

October 22 and 23 was the start of the team event, REDFISH X. Each team was sprinkled with novice and experts alike, all hoping for the “Big Red.” In the dim morning light, many boats crept their way to their favorite spots. Although a few tried their hand north of Marco, most captains steered their boats south in hopes of clean waters and abundant fish. The winds subsided slightly, sun shone brightly and the two-day competition was on!

For the Blue Team, novices Paul and Sharyn Kampmeyer caught their first redfish, one each! Admiral Victor hooked up to a big snook (as usual) to capture the largest wildcard fish and Captain Dick Yeaton, crew members Phil Madonia and Walt Turner captured the three man boat award for the two-day event with nine redfish. At the completion of two days, the Blue Team caught 30 redfish, totaling 670 inches of fish.

However, the Red Team appeared to have the edge in veteran fishermen. Admiral Jay Jones

and crew member Keith Wolthman captured the two man boat award, also with nine fish. Awards were given for day one and day two largest and second largest redfish, most spots on a redfish for each day, wildcard fish, etc. The Red Team dominated these awards, capturing seven out of 11 individual awards. The Red Team won the competition with 48 redfish, totaling 1,032 inches. Not bad fishing by both teams for a day and a half!

After fishing, a happy hour/tally sheet return party was held at Mario’s Bar & Grill. Lots of fish stories were told of “the one that got away,” but the captain’s tally sheets told the real story.

The awards would have to wait until the following Wednesday, but before that, was REDFISH MONDAY, a competitive event fashioned after the Bass Tournaments that you may have seen on TV.

Nineteen boats carrying 38 anxious anglers lined up three abreast at Walker’s Coon Key Marina, awaiting the “Go” signal! At ten second intervals, each group sped off into the sunrise to their secret honey holes, each boat trying their best to land two “slot” size (18”- 27”) fish. The weigh-in was held back at Walker’s, and officiated by an independent weighmaster. Slowly the boats came in, everyone fishing “the tide.” When the dust settled, only five boats out of the 19 brought back nine fish to weigh-in.

It was a close contest; between the 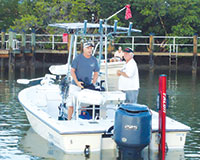 first and fourth place fish total weight, there was only a one-pound difference. Awards totaling another $1,300, plus three Maverick Boat apparel gift certificates, were given out that afternoon. It was an awesome day for the tournament anglers.

Wednesday evening the Full of Bull Tournaments wrapped up with an awards ceremony at the Old Marco Lodge, complete with musical entertainment and a lavish buffet. Following the delicious dinner, tournament directors John Marchetti and Ron Linn presented the awards for REDFISH X. Club members were presented over $1,300 in awards.