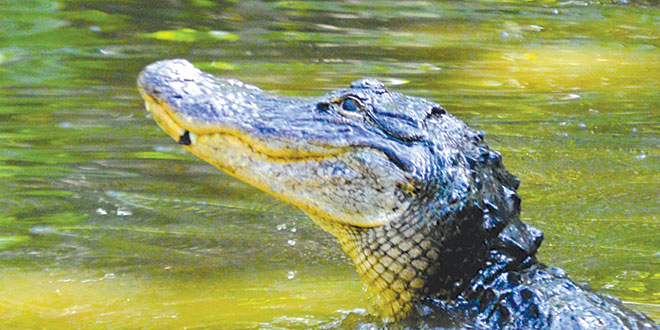 A few weeks ago I took a walk through several different areas of the Everglades, and there was a very distinct and serene quiet, a sound of silence that was not there in early summer.

During the months of May thru July, I could hear the unmistakeable bellowing of male alligators trying to entice the females. Some of these boys have traveled great distances to find a mate. Now, all is calm.

Courtship rituals are complete, and females are tending to their nests, waiting for the young to hatch. The males have moved on, having done their part to assure the survival of the species. The females now bear the responsibility of guarding the unhatched eggs and then protecting the young.

Nearly all alligators, both male and female, become mature when they reach an approximate length of seven feet. It is not a specific age that determines this sexual maturity but rather the physical size and development. Females might require ten years or more to reach this stage and males about eight to twelve years.

Courtship begins in the springtime, and mating occurs in late spring into early summer. The female will then build a nest about three to four feet wide 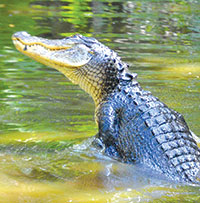 and nearly six feet long. Instinctively the mom-to-be constructs this nest above the high water mark to keep the eggs from flooding, which could ruin them within a day.

The number of eggs, called a clutch, will average about 35 per nest. Once the eggs are deposited in the nest by the female, she will cover them, and they will incubate in the warm sun. Mom will remain near the nest during the entire incubation period, which will last about 60 days. She will protect the eggs from predators, such as raccoons, hogs, otters and even bears, helping to insure as many live births as possible.

When the eggs are ready to hatch, mom will respond to calls from the newborn and will help to dig them out of the nest. She will carry several at a time down to the water in her mouth, open her jaws and shake her head gently from side to side, encouraging the young to swim out. These newborn, about eight inches long, will stay together in pods that could include hatchlings from other nests. They will receive mom’s protection for at least one year, sometimes up to two or three years.

There will be a mixture of male and female in the pod, and that is determined by

This hungry adult female actually raises up on its hind legs in shallow water and then lunges down to catch a fish! PHOTOS BY BOB MCCONNVILLE

Mom will quickly respond to any calls from the hatchlings facing danger. Even though the young grow quickly during the first four years, averaging about one foot per year in length, they are easy prey for raccoons, otters, wading birds and some fish. Their most significant predator…large male gator.

Because alligators are ectothermic (they rely on external heat to regulate body temperature), you will usually find them near bodies of water to cool off when the sun gets too warm. The newborn are no exception.

Even though the survival rate of young is only 10 percent, these alligators are an important players in the Everglades’ ecosystem. There is a series of checks and balances in nature here and having a sufficient number of young survive to adulthood is critical to maintain that balance.

When visiting the ‘Glades, keep an eye out for these newborn. It is, indeed, their birthing season.

Bob is the owner of Steppingstone Ecotours and a naturalist with the Dolphin Explorer’s survey team. He is a member of Leadership Marco 2014. Bob loves his wife very much!