It’s All in the Coat 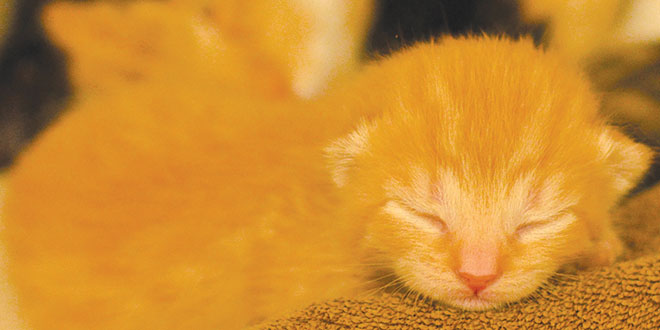 It’s that time of year again — “kitten season!” And are we ever bursting at the seams with adorable little furballs. Our first two litters of the 2014 season were born right here at the shelter, giving us a total of 11 baby felines in the wink of an eye.

For those who may have forgotten, the 2013 season delivered 176 kittens, all of whom found fantastic fur-ever homes thanks to all of the love showered upon them by my staff of 80 erstwhile volunteers. And, of course, thanks to my extraordinary abilities as matchmaker.

I can see all of you now. You’re scratching your furry heads and asking yourselves, “How does that darned tortie do it?” Well, it’s way more scientific than you’d think. It’s all in the coat because, believe it or not, coat color is a great predictor of a cat’s temperament.

Lets say someone makes an appointment with me to stop by and see my current line-up of felines-in-waiting. In order to avoid mismatches, the most important question on my mandated 64-question interrogation form is whether a potential adopter’s cat household currently contains a tortie. If so, we need go no further.

You ask, “What’s the big deal with torties?” Being that I am one, I can tell you. We are bossy; we don’t like competition; and we loathe sharing. Our co-founder Jan Rich describes us as being “the redheads of the cat world.” We are possessive of our humans, loyal, moody, hot-tempered, and will never be lap cats — don’t even think about it. In fact, it has been alleged that we have “tortitude.” You need permission to pet us because we do not like to be disturbed. And since we spend about 23.5 hours a day eating and sleeping, that leaves a very small window of opportunity during which to interact with us — 30 minutes to be exact.

Since my position as shelter supervisor requires me to work full time, however, I must keep my eyes open a minimum of 45 minutes daily. That’s what it takes for me to keep all of the cats, kittens and volunteers in line. I must, however, make a confession. In an effort to keep our other co-founder, Jim Rich, from oversleeping during his afternoon naps, I have consented to nap with him. On his lap. It makes him feel special. Pretty clever girl, aren’t I? Just another tortie trait. Oops! I nearly forgot to tell you that calicoes are nothing more than camouflaged torties. They have white areas in their two-colored tortie coats, and they are usually nicer than torties.

You just can’t bring a new cat into a tortie household without tremendous upheaval and an insoluble litany of problems. Lots of hissing, inappropriate marking, lapses in litter box 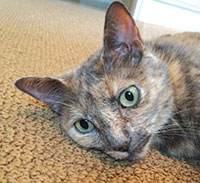 etiquette, stalking, stealing food and even the occasional mugging.

You might get away with adding a black-and-white kitten — which includes the tuxedo cats — to the mix because they are fun, laid back and affectionate little critters. And they are the party animals of the feline world. They can even be clown-like, and take pleasure in entertaining their humans with gymnastics tricks. A pure black cat, which you superstitious humans mistakenly believe to be bad luck, is especially healthy (complicated story involving genes, mutations, X and Y chromosomes, etc).

Your tabbies, of which there are 2,000 possible varieties (every cat is basically a tabby), love to eat and be loved, but can be slothful and prone to weight gain. The silver/gray ones tend to be shy but affectionate and are very un-cat-like in that they are very dependent on human contact. The orange ones are supremely good at hunting down mice and rats. This may explain why for years every feral cat and kitten we trapped at the Hilton was an orange tabby. Something to do with proximity to water and dumpsters with lots of yummy treats within. Surf-n-Turf anyone?

Moreover, orange tabbies have a docile temperament that makes them easy to train, just like you people out there. Why else would so many of them appear in television shows, movies and commercials? Remember “Morris,” America’s cat food “spokescat?”

By now all you felines out there are pretty mad at me for revealing our biggest secrets. I have just given cat profilers the playbook to our souls. Or have I? Remember, humans believe that the zodiac sign under which they are born bestows upon them certain powers. Pretty silly, isn’t it?

On the home front (remember, I was given a fur-ever home for Christmas last year), I have been slowly scaling back as full-time shelter supervisor so I can serve as house-cat-in-charge at Jan and Jim’s pad. Remember, they started this whole “For the Love of Cats” thing way back in 2002, and have graciously allowed me to live at the shelter for the last five years. Sadly, no one else wanted me. Do you think it was because I liked to bite people? I wasn’t being malicious; I just wanted to taste every human I came in contact with. And I’ll let you in on a little secret — I’m a real people pleaser. I love to help Jan in the kitchen and am the household’s official taster. I like kidney beans, tomato juice, corn chips (hold the salsa) and potato chips (yes, include the cream cheese dip). I even like sticking my nose in the flour!