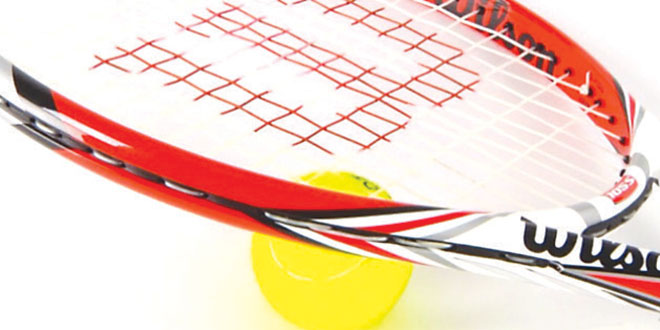 As with trying to choose which racquet is right for you, nowadays there are a wide variety of strings to choose from.

Not too many years ago, most players on the pro tour used natural gut string because it provided them with more grip and control of the ball. Natural gut string is actually cow or sheep intestine, which is composed of individual fibers that are wound together to create a certain thickness of string. But natural gut costs around $45 to $60 per set.

Because of the high cost of natural gut, most club level players have always chosen to play what is called synthetic gut. Synthetic gut is basically a nylon string, which can be either a monofilament or multifilament string. This soft, synthetic string provides grip and control, somewhat like the feel of natural gut, but it only costs between $5 and $10 per set.

In today’s game of professional tennis, the pro players hit the ball very hard, but the real factor involved is the amount of spin they put on the ball. To help apply this spin, they use a special type of string. This string is constructed of a poly carbon fiber, which is very hard and allows players to impart extreme amounts of spin on the tennis ball. This type of string is generically referred to as hybrid string. The cost of hybrid string averages between $15 and $20 per set. (See Photos 1-4)

While pro tour level players have been playing hybrid style strings for several years, this whole concept really took off a few years ago when Babolat developed a string for Rafael Nadal

called RPM (Revolutions per minute). This string, along with Nadal’s radical and extreme forehand stroke, allows him to impart an average of 3,000 revolutions on the ball from contact off of his racquet to contact on his opponents racquet!

I have recently had many students and customers saying they want to switch to a hybrid string, so they can get more on the ball, like the pros do. While hybrid strings do provide more spin, we must be cautious! Competitive pro tour level players adhere to a very strict regiment of strength training, along with stretching to help prevent injuries when competing.

Players on a 3.0 to 3.5 level of play don’t necessarily follow an off-court conditioning regiment. Along with this, the power in their strokes does not provide them the ability to truly take advantage of the performance of this type of string.

Earlier this year, I saw a great interview with commentator/coach/retired pro tour player Brad Gilbert, who gave his professional opinion on when younger (junior) players should begin to think about using a hybrid style string. He was very adamant that young players should not be allowed to use this type of string until they are fully developed physically and training specifically for the sport of tennis. Something I wholeheartedly agree with! This statement holds true for adult players, too.

While this type of string does provide extra spin, because of the harshness of its construction, it can be very hard on muscles and joints in the hand, wrist, elbow and arm.

I am on court daily hitting balls and I adhere to a regular off-court exercise regiment. However, when I 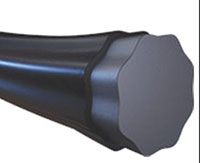 experimented with these hybrid strings, while I did notice a significant increase in the amount of spin I could apply to the ball, I also experienced pain in my wrist. String manufacturers have realized this and are now producing strings that are a blend of multifilament synthetic gut and hybrid poly materials. This will provide players the option of a string that can produce more spin but (hopefully) not cause injury.

However, as a coach and a stringer, I would not recommend this “mix” style of string for anyone under a 4.5 level player for two main reasons. Number one, even if we are a 4.0 ++ level of player, if we are not training and conditioning ourselves to be in tournament play condition, but remain as weekend warriors, we still run the risk of pain or injury, simply from the fact that we are part-time athletes, not pros on the tour earning a living. Secondly, as mentioned before, recreational players of a 3.0 to 3.5 level don’t have the power in their strokes to provide them the ability to truly take advantage of the performance of this type of string.

So what are our options?

You would be amazed that something as simple as going to a thinner gauge string and adjusting your tension can provide you the ability to create more spin, have more control and not risk injury.

Racquet manufacturers are now designing racquets that help players to produce more spin. These racquets tend to have fewer cross strings than traditional racquets, which create a wider gap between the main strings and cross strings. Choosing a racquet with a wider, 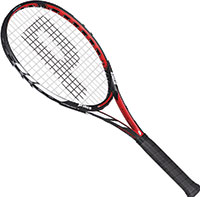 more open string pattern, will allow you to get more grip on the ball at contact. This extra grip will help to get more spin on the ball. In addition to this, a heavier, more flexible racquet will also help to hold the ball on the strings longer. (See Photos 5 and 6)

It’s basic physics, the more traction and grip I have, the more control I have.

With all that said, players need to find a racquet and string that best suits their strength and ability.

One of my previous columns was titled “Change and Choice.” As we age, our abilities and our needs change. As this occurs, we need to make equipment changes. Players in their 50’s or 60’s don’t have enough power in their strokes to be able to “muscle” a heavy/flexible racquet as players in their 20’s or 30’s.

My suggestion is to talk with your teaching pro, who, if you are lucky, also does your stringing. Determine which combination of racquet, string type, string gauge and string tension is best suited for your level of play, as well as your level of fitness.

Wayne Clark is a certified professional tennis instructor with over 23 years experience coaching players on all levels of the game. Wayne is also qualified in pickleball instruction. He has been the head instructor at the Marco Island Racquet Center since 2001. The Racquet Center offers clinics, private and group lessons for both tennis and pickleball. Coach Wayne’s Island Kids Tennis juniors program runs year round and has classes for players from kindergarten through high school.

Contact Coach Wayne by email at WClark@cityofmarcoisland.com, by phone or text at 239-450-6161, or visit his website at www.marco-island-tennis.com.