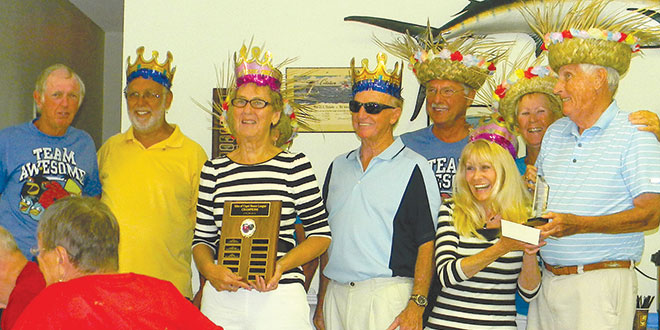 The Beach Bums handed over their crown to the Hurricanes. PHOTOS BY JOAN AND CARL KELLY

By Joan and Carl Kelly

The Isles of Capri bocce season ended on March 14 with a celebration. Eighteen teams participated with the top eight teams battling it out this week for the championship. It all came down to last year’s winners: the Beach Bums vs. the Hurricanes. The Hurricanes came from fourth place to win the tournament.

Division A winners were Island Breeze, Ann and Eddie Hall, and Kay and Gene Brady. Division B winners were the Magnificent Frigates, Joan Kelly, Mary Ann and Lynn Fisher, and Fran Mc Cormack.