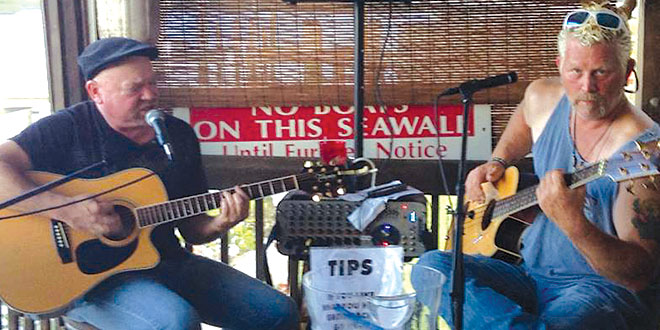 Billy J and the Big Easy play regularly at Marker 8.5. The duo pack this small venue with a large crowd.

Anyone who knows me knows I love listening to live music and enjoying a cold drink with some friends. Music has always been very close to my heart. I’ll listen to almost any genre, depending on my mood: country for the “nothing else could go wrong” day; metal or punk if I’m angry or a little rebellious; electronic or dubstep if I’m in the dancing mood.

Where ever I go, I always check out the local music scene. I’ve known fantastic musicians in every place I’ve lived. I prefer small, unique venues and undiscovered talent. My favorite bar has a tree growing through the middle of the floor and out through the ceiling, and it hosts the best unknown bands.

In my short time here in Goodland, I’ve experienced some of the greatest music I’ve ever heard in a few of the coolest places I’ve ever visited. I was instantly enamored with the impressive talent and the variety of artists, both imported and homegrown.

attract crowds eager to listen and have fun; many of the popular and talented performers call Goodland home.

Little Bar owner, Nicolette Bauer, says she tries to get a good variety from everywhere. She spends all summer traveling around the country looking for bands. Word of mouth helps bring great music to her as well.

“We get the word out there, and word travels fast because we are kind of known for our music,” said Bauer, “I book it all in and mix it up a little bit, so we don’t have the same thing over and over again.”

With an abundance of blues and jazz, artists who travel here to play at the Little Bar include Rosie Ladet, the Zydeco Queen; Grady Champion from Mississippi; and the Frank Corso Blues Band. The wonderful local flair includes: Sal; John Lowbridge; Smokin Joe and Connie; Raiford Starke; and Merrill.

Merrill first came to Goodland 20 years ago, and played his first gig in town at the Little Bar. Now, he’s a regular performer here. “If you want to see live music in Southwest Florida, Little Bar is the place to be,” said Merrill. 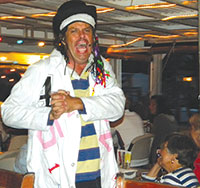 Billy Bridger sings “Do You Really Want to Hurt Me” in his Boy George getup, complete with bright pink lipstick. PHOTOS BY MELINDA GRAY

to Goodland about three years ago, but has been playing in this area since around 1994. He’s been known to jam with the different blues bands that play at The Little Bar, and he puts on an awesome solo performance there regularly.

“It always seemed like a special place. When bands play, they are just blown away by the reception they get,” Starke noted. “I’ve played in places where you don’t get that appreciation.”

Stan’s has a similar process to that of The Little Bar. Trish Oehler, assistant manager of Stan’s, was first put in charge of finding the entertainment last season. She spends a lot of the summer online “following the link” from YouTube to band websites and everything in between, searching for music that catches her ear.

“We started going out of town looking for new bands last season. We like the local flavor, but want something different every now and then too,” said Oehler. “Still, most days we remain loyal to the ones who have been with us over the years. That was one of Stan’s pet peeves; he was always loyal to his Sunday Bands.” 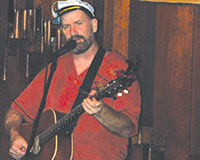 Raiford Starke giving a well-received solo performance to the crowd at the Little Bar.

Billy Bridger performs each Thursday and Friday at Stan’s. He is known for his unique costumes and random acts of ventriloquism, which he incorporates into almost every song; he weaves his way through the tables, drawing the audience into his act.

Dieter’s Blues Machine, another crowd favorite, also can be seen every Sunday at Marker 8.5 and regularly at the Old Marco Lodge.

During season, live music can be heard anywhere in Goodland. The sound reaches almost every corner of the island. Some nights, I just sit on my lanai and enjoy a song. Through speaking with so many of the area musicians, I’ve found we all agree — life is good in Goodland.