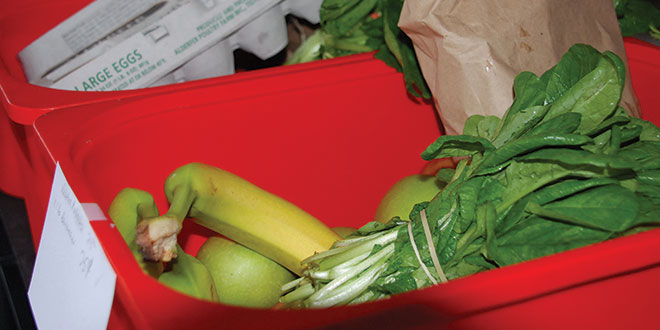 Red bins are $25 per week, and additional items are available upon request.

For the last eight months, Eileen Malaret has been very busy on Mondays and Tuesdays.

As the current organizer and buyer for Island Organics Buying Club and Community Garden, Malaret spends Mondays ordering produce. On Tuesdays — with the help of a few volunteers and space at Island Garden Center — she divides up the fresh, seasonal fruits and vegetables amongst the 25-30 members of Marco Island’s only organic food co-op. Members pick up their healthy, pesticide-free produce between 3-5 PM every Tuesday.

For Malaret and her family, Island Organics was just what the doctor ordered when they moved to Marco Island from Miami 18 months ago. Her husband was battling renal disease, and it was imperative her family eat organic fruits and veggies. She joined the organic co-op, and soon found herself elbow deep in

Patti Sweeney sets up her vegan line of soaps to sell each week alongside Island Organics Buying Club and Community Garden. PHOTOS BY NOELLE H. LOWERY

“I was involved as a member,” she explains. “It was something to do and to help me meet people.” Then, when founder Patti Cohen mentioned that she might have to shut the co-op down, Malaret stepped in to take over the purchasing and operation of the group.

Cohen, Marco Island’s resident homeschooling guru, started Island Organics in 2011, as a community service project for the children in her homeschooling group. She and handful of other moms were making a weekly trek to an organic co-op in Naples to purchase naturally-grown, pesticide-free produce for their families, and decided they would try to do it on their own in Marco.

To be sure, organic coops have been sprouting up all over the United States for years, as more people are searching for less expensive ways to provide their families with 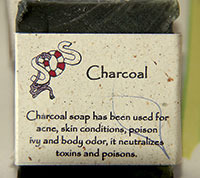 healthy food. The concept is simple. Coops order produce in bulk directly from farms or wholesale distributors, cutting out the middleman (usually the grocery store) and his mark-up and resulting in overall lower food bill costs.

Co-ops also tend to support local famers as much as possible, choosing seasonal fruits and veggies. Island Organics works with Ionuyi Farms, Oakes Farm and Food & Thought, and fills in with produce from Albert’s Organics in Sarasota (a wholesale supplier who provides produce to Publix Supermarkets) whenever necessary.

At its peak, Island Organics had 76 members. “We really built a community around the co-op,” notes Cohen.

To that end, Island Organics also invites like-minded small businesspeople to set up shop alongside it every Tuesday. One of those folks is Patti Sweeney, who has been making all-vegan, all-organic soaps since 2010. 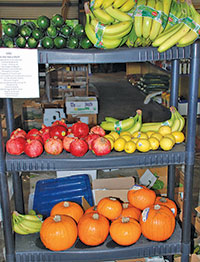 Folks can come in and purchase other items off of the shelf as well.

we put on our skin effects our health,” notes Sweeney.

Currently, she a line of 14 different soaps that she makes by hand everyday, selling them in private networks, church bazaars, farmers markets and four retail stores in Pine Island. Her top-seller is the Charcoal bar, which absorbs impurities and toxins. It accounts for one-third of Sweeney’s sales.

Today, the co-op’s 25-30 members pay $25 for a weekly large red bin of produce and $15 for the smaller green bin. Members pay a registration fee for the bins when they sign-up for the co-op — $5 for a green bin and $10 for a red bin. All funds collected go to pay for the produce. The co-op 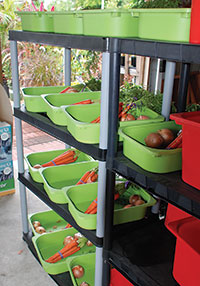 Weekly green bins of seasonal fruits and veggies are $15.

makes no profit, and is operated by volunteers.

Each week when members come pick up their bins, they are full of a vast array of colors, textures and tastes depending on what is in season. For example in November just prior to Thanksgiving, the bins contained carrots, beans, pears, oranges, potatoes, a pie pumpkin, onions, kale and spinach.

Based on what is available from suppliers, Island Organics also orders extra staple items — lemons, bananas, eggs — so members can pick them up along with their bins. What’s more, if a member wants to put in a special order, he or she can do that as well. For example, one member orders cucumbers in bulk to make the base of his various juices.

Interested in becoming a member or learning more about Island Organics Buying Club & Community Garden, then visit them on FaceBook: www.facebook.com/pages/Marco-Island-Organics-Buying-Club/116273551783526.