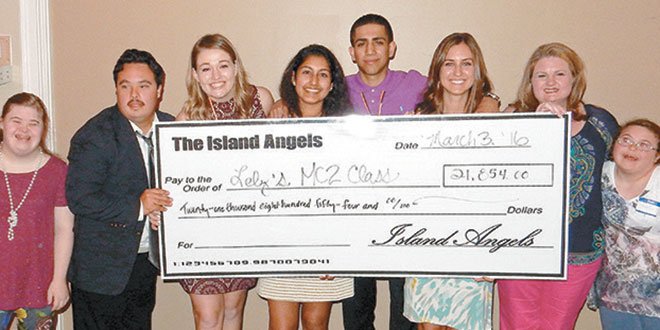 A little more than $22,000 was raised for the program at an Island Angels benefit, with the lion’s share of the money going toward purchasing new appliances for the Breakfast Café that operates from the kitchen at the classroom’s rear.

As part of the curriculum, Cholka and her class prepare and deliver breakfast for the school’s staff every school day. The practice imparts such important life skills as cooking, grocery planning and purchasing, answering phones and emails, operating a cash register and more. What was a small-scale operation prior to Cholka’s arrival seven years ago, has grown to the point where demand is severely taxing the kitchen’s decades-old appliances.

“The teacher before me (Joe Rader) started 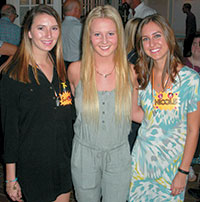 a small breakfast business and in the past five years, it’s grown to the point that we’re selling between 20 and 30 orders a day,” she said. “The staff is really supportive of my students. They’re the ones who are cooking and delivering the breakfasts. Many people tell me it’s the highlight of their day, when my students come and bring them their breakfast.”

Held recently at Bistro Soleil, about 110 people attended the $25-per-person benefit, which included hors d’oeuvres and a vast assortment of silent auction items donated by local individuals and businesses.

A portion of the proceeds will also be used to update Cholka’s self-contained classroom, which houses seven students between the ages of 14 and 22 who have moderate cognitive and physical impairments. The remaining funds will be used for a class trip to Disney World at the

“Many of the students have never been to Disney World, so it’s a once in a lifetime opportunity for them,” said Cholka, of Marco Island.

“We call ourselves ordinary women trying to do extraordinary things for people in need,” said Cummings.

Cummings said Cholka’s program was chosen to be the benefit recipient after she and her fellow Island Angels visited the classroom.

“We absolutely fell in love with the students and Nicole as a teacher,” she said. “Even though we knew we’d have to raise quite a bit of money to help them with all three things, we thought we could make that happen. They’re just such an amazing group. The students

are so kind and so encouraging of each other, and so excited about life and learning and fun things like Disney that we just had to help them.”

Donations for the program were even received in the days after the benefit. Cummings said she was deeply moved by “how many people came together and not only opened their hearts, but opened their wallets. It really made for a magical evening.”

Cholka said the Island Angel’s assistance means the world to her and her classroom.

“It’s truly an amazing opportunity and it’s going to allow our program to continue for many years to come,” she added. “All of our appliances are over 20 years old, so it’s going to benefit my current students, but also future students, for many, many years.” For more information about Island Angels, call Cummings at 920-660-6363 or send an email to marcoislandangels@gmail.com.