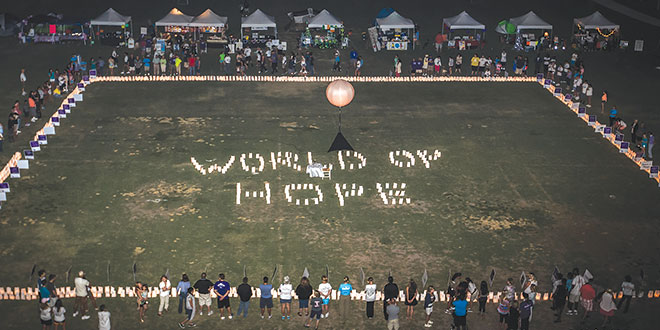 Mackle Park was a flurry of activity on Saturday, April 12, as the Relay for Life of Marco Island, presented by Robert J. Flugger, filled it with the sights, sounds and smells of a carnival, bringing people together to “finish the fight” and end cancer by working to find a cure. It seems everyone has been affected by this disease in some way — through loved ones, family members or in fighting their own personal battles with the disease.

Teams, volunteers and attendees united to promote awareness, raise money to benefit the American Cancer Society (ACS) and to celebrate cancer survivors. From the start of the event at 4 PM Saturday to the end at 6 AM the following morning, the course is continually walked in respect for those who lost and those who survived cancer.

This year’s event was dubbed “A World of Hope,” and members from each team — 30 in all — manned individual tents decorated to represent different countries, while other team members took turns participating in the day’s activities. The teams have been raising money for 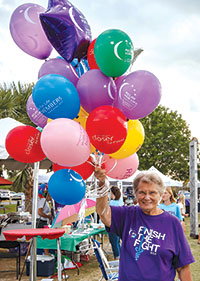 months leading up to Saturday’s relay.

“We’ve had a good time fundraising all year, and this is a worthy cause,” said Chris Pritchard, Toastmaster division governor, who ran a Japanese-themed tent with his wife, Robyn. The couple has been involved in the Relay for Life for many years.

The Marco Island Academy Interact Club spearheaded the idea to form a team for their school. The Leadership class raised $200 prior to the event, and students from the campus volunteered to work the tent.

“Cancer affects everyone’s lives; they all have personal stories, and I do too,” Scott added.

The Corps of City Employees for Marco Island has been fundraising for months, raising $2,500. Their tent had a London motif and offered relaxing spa services to participants.

“My co-workers and I thought that as public servants we should support something like this, and we all have our personal reasons, too,” said Kate Whitson, planning and zoning technician for the city. Kate and her husband, Randy, participated

in the Seventh Annual Marriott Lights of Hope ceremony in February at the Marco Island Marriott Beach Resort and Spa. There, they told the story of the road they traveled together through Randy’s fight with lymphoblastic leukemia.

Doug Nettles of My Marco Properties, and his business partner, Loni Atton worked their “USA” tent, complete with apple pie and vanilla ice cream. Also in attendance was Atton’s mother, cancer survivor Susan Flowers, the inspiration for their team.

“We are fundraising, but we are more interested in just being here. We absolutely love being a part of ACS and wouldn’t miss it for the world,” said Nettles.

Raul Medina of Suntrust Bank chaired the event for the second year in a row. “The location was great this year, and the community support, with 30 teams participating, was great too. Of course, we couldn’t do it without Lisa Honig and Sue Olszak. Besides everything else they do leading up to the event, they worked all day and night to make sure everything ran smoothly. We had the support of many top notch people. Reaching our goal of $235,000 is amazing.”