Into Africa, Part Two: The People 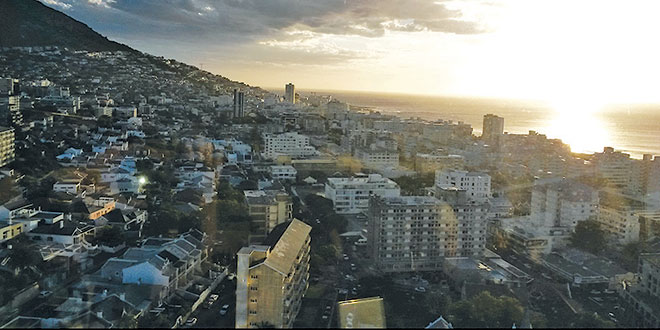 At night from a rooftop restaurant Cape Town shows some of her beauty.

As we considered our trip to South Africa we thought of some of the people and places: Zulu, Bushman, Dutch, English, Afrikaner, Johannesburg, Cape Town. As we traveled to South Africa those words were gradually filled by personal names, histories, stories and details. We came away richer for the experience.

We met Jonathan in Johannesburg, Joberg to the locals. Jonathan is a Bushman, the grandson of a chief. He learned herbal medicine from his grandmother, has an herb garden at home. As we walked and he named plants, he noted their medicinal value, headache, upset stomach, muscle cramp. We learned and forgot a lot.

The Bushmen were the original native people of South Africa. The other tribes came later, migrating in from central and western Africa. We noted a hint of pride when Jonathan spoke of the Bushman’s

Zulu men and women welcomed us into their circle with dance. The men followed the dance with a mock battle.

priority in the country.

Eleven languages are spoken in South Africa, nine tribal languages plus Afrikaans and English. Most people speak two or three of them. English is spoken everywhere. The guides speak several South African languages and some foreign languages. There is something we find impressive about that.

Michael was our guide to an abundance of animals. I counted more than 200 species we identified. A game guide needs many skills and is tested prior to his licensing. The final test is tracking the big 5 on foot. The Big 5 are South Africa’s most dangerous animals: lion, leopard, elephant, rhinoceros, cape buffalo. The guide must track and sight all five to pass. And, he must return alive.

Zulu men and women welcomed us into their circle with dance. The men followed the dance with a mock battle.

continuing to live there. His home and land are an essential personal link to his heritage. It is important. He sees his job as part of the larger conservation effort in South Africa, and that is also important. So, he drives 200 miles.

In Swaziland we visited with children in the Fontein Social Care Center. Funding for the center is not dependable, so with Jonathan’s leadership we shopped for groceries in a people’s market. Then we bussed to the center, prepared a meal and ate with the children.

We found the children to be typical children, bright, energetic, eager. But, we know their future may not be so bright. These children are considered at risk because they have lost at least one parent to HIV/AIDS. The rate of HIV infection in Swaziland is 26%.

So, we wrapped our arms and hearts around them, we

Entering Cape Town we see substandard housing beside the highway for several miles. This is typical of the large cities in South Africa.

sang with them and cried inside.

At Hluhluwe (SHLOO-shloo-wee) we were introduced to Zulu people and some of their culture: shield making, spear making, pottery and beadwork, traditional dress customs. Shields are small or large. The large are for the warriors. The small are for children and for the wedding gifts to one’s wives.

Yes, a man may marry as many wives as he can afford, so long as they all are gifted, dressed, and housed equally. Few men in the modern world can afford more than one wife. But it is legally permitted to the tribes that traditionally have practiced polygamy.

The Zulu welcomed us with a fermented grain drink served in a ceramic bowl. A few of us took more than one sip. Then, they danced and held a mock battle.

They taught us a few words and phrases. The most useful was 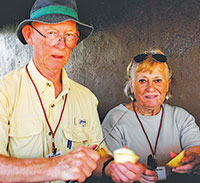 Yeabo baba. Think of it as Yes with an exclamation point.

We ended our time in South Africa as we began, in big cities, Johannesburg and Cape Town, the homes of Nelson Mandela and Bishop Desmond Tutu. We visited Mandela’s home and Tutu’s cathedral and were reminded that it has been roughly 30 years since those two men led the country to dismantle apartheid.

The people of South Africa have dealt well with racial relations in those 30 years, but not with the extreme poverty of a large segment of the populace. We passed miles of tin shack slums as we entered the larger cities. The Mandella administration built thousands of low cost houses for the poor, so much so that they are now called Mandela Homes. But, that is just a beginning.

Would we return to South Africa, you ask. Yeabo baba!