Into Africa, Part One: Safari 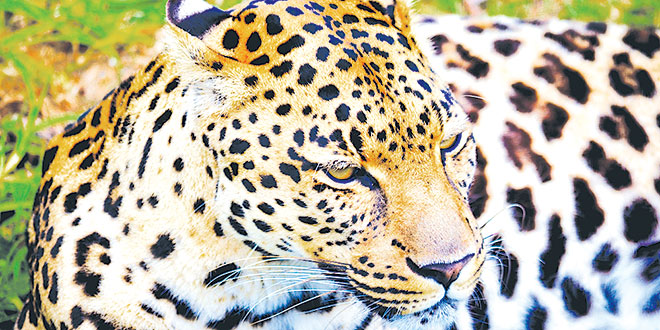 Leopards are counted among the Big 5, the most dangerous South African animals: Lion, Leopard, Elephant, Rhinoceros, and Cape Buffalo.

Now say safari. The mind reels with excitement and danger.

That is how we approached our trip to South Africa last fall. It is what we expected. And South Africa did not disappoint.

We began on safari. Each day we rose before sunrise, boarded a 10 passenger 4 by 4, and rode into the bush for four hours of game drive, seeking and viewing animals. Our guide Michael reminded us each day to be very quiet when near any animals, to run all of our electronics in quiet mode, and to turn off the flash on our cameras.

One morning we tracked two cheetah that were on the hunt. They passed by herds of impala and wildebeest because, Michael said, they were looking for an easy kill. A long, fast run tires them and puts them at

risk. An easy kill is better.

They trotted a wide circle around a lake where prey animals come for water. We followed their tracks, but never saw them. So, we photographed their tracks.

Returning to camp after four hours in the bush, we breakfasted and took a few hours for some discussion of history and culture and for free time.

On nearly every branch of a tree outside the thatch roofed dining room masked weaver birds were weaving their nests. The male always builds the nest. The female inspects it. She may reject it and throw it to the ground. So, he must build another nest, and maybe more.

A female warthog grazed her way through the camp. We got a very close look at one of nature’s very ugly animals.

At 3:30 after lunch we boarded the 4 by 4 again and viewed animals till sunset. On the afternoon of the same day we’d tracked cheetah, we found a female cheetah that had just made a kill and was feeding.

She was very cautious, raising her head to look around every few minutes. Michael 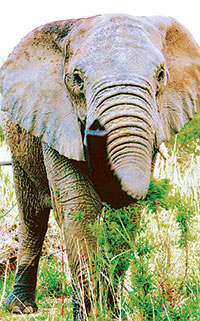 One female elephant turns from browsing grasses to raise her trunk and smell us. Are we a threat? She’s not sure.

explained, cheetah are fast but not strong. She could easily lose her supper to hyenas if she does not watch while she eats.

The guides in the area stay in contact by radio to alert each other of animal sightings. There was a male lion in our area. So, we went looking and found him lounging, head up, stomach full but alert, sunning himself after a kill.

Michael moved the vehicle slowly, by inches until we were about 50 feet from the lion. He was beautiful, golden brown, his mane beginning to go black, six or seven years old, in his prime.

We observed silence while he observed us, apparently having decided we posed no threat. We stayed 15 minutes, filling our cameras with gigabytes of lion. Then we slowly, reluctantly moved on. Marvelous!

As the sun was setting we found a herd of six female elephants grazing on the long grass beside a small stream. They moved toward us step by step pulling grass with their trunks, paying us no attention. Sunlight was waning but we kept our camera flash off.

A female black rhinoceros browses near a stream. It is unusual in the Entabeni Game Reserve to see two 4 by 4s gathered.

female with tusks stepped straight in front of our vehicle about 40 feet away and seemed suddenly to notice our presence. She extended her trunk toward us and waved it side to side smelling us.

Michael had been quietly on the radio, keeping his superiors at camp informed, as he had many times on every game drive.

The elephant in front of us stomped her front feet, a defensive/aggressive move. Michael backed the vehicle two feet. She stopped stomping.

But the herd had moved to our left side and one had gone behind us. We kept absolute silence, hardly breathing, not moving in our seats. These elephants were entirely too close for comfort.

Michael backed slowly. The elephant behind moved aside. Michael kept backing till we were clear of the elephant herd.

Returning to camp in the waning light of early evening we found impala roaming next to our tents. Though they have horns and can be dangerous, it seemed a comfort to have impala in our camp. We cleaned up and went to supper.

Watch the next edition of Coastal Breeze News for more on the Kellys’ adventure in Africa.