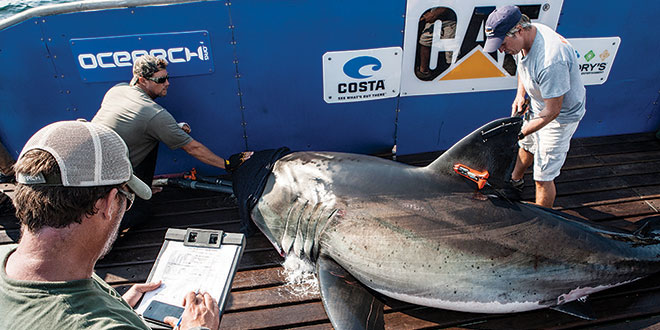 Katherine, a female great white, is one of the sharks the Global Shark Tracker follows. SUBMITTED PHOTO

Great white sharks. For some, those three words cause the hairs on the back of the neck to stand on end. Others will get goosebumps. But for a select few it means it is time to go to work. Such is the case with Chris Fischer.

Recently Mr. Fischer donated his time to educate students at the Marco Island Academy about his life work and passion, tracking sharks around the globe. His goals, however, reach much deeper than that. He is a scientist, an educator and a motivator. As founding chairman and expedition leader for OCEARCH, Chris’ team is a recognized world leader in generating critical data regarding apex predators of the sea.

OCEARCH shares real-time data through their Global Shark Tracker, they inspire current and future generations of explorers, scientists and stewards of the ocean and they also enable leading researchers and institutions to generate previously unattainable data.

Research expeditions are conducted aboard the M/V OCEARCH, their at-sea laboratory. Attached to the ship is a 75,000 lb. capacity hydraulic platform designed to safely lift mature sharks out of the waters, at which time the multi-disciplined research team will conduct as many as twelve different studies in a matter of fifteen minutes. The team has tagged 80 great whites, and just as many tiger sharks, to track their movements and study their habits. The results are

proving to be extremely important.

Little was known about the annual movements and migration patterns of the giant predators until OCEARCH began their program. Speculation abounded, but actual facts about specific routes did not become more clear until 2013, when the team launched the Global Shark Tracker website and mobile app. It is now obvious where many of the creatures go, how far they travel and where suspected mating and birthing areas may be.

Here are some actual case studies. Lydia, an adult female great white, logged 36,000 travel miles in just two years. Mary Lee moved 30,000 miles in three years. Since both are females, it was determined that they returned to breeding areas once every two years. Since the gestation (pregnancy period) for a great white is 18 months, this would make sense. Males visit the mating site every year. Studies have also concluded that these sharks do not reach physical maturity until they near their 20th birthday.

On the education side, the OCEARCH STEM curriculum enables students to learn STEM skills while following real-time data about movement of specific sharks. Currently available for grades K-8, the education system is based on the Global Shark Tracker and Next Generation Science Standards (NGSS). The OCEARCH Stem curriculum for grades K-12 is expected to be available by the end of this year.

STEM is an acronym for Science, Technology, Engineering 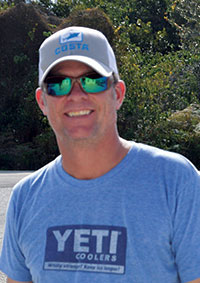 In addition to science and education, Mr. Fischer’s presentation at Marco Island Academy revealed his passionate side, inspiring the students to pursue their dreams. With such catch phrases as, “The largest room in the world is the room for improvement,” and his request that they pursue their goals deliberately with, “An inch is a cinch, a yard is hard,” he truly captured the attention of everyone in the room. His goal to mix passion and do some good at the same time has definitely contributed to his personal success. He hopes his “Ocean First” motto will become a common vision for all.

Citing some little known facts, Mr. Fischer turned his attention to the local waters that could be affected by worldwide events. Not too many people are aware that 200,000 sharks are killed each day around the globe. Chris was quick to point out how an event like this in our area waters would be devastating.

Reactions from MIA students regarding these possibilities and facts were eye-opening. Interviews with several students after the presentation revealed a genuine interest and concern by many of them regarding what could happen right here in their own waters. Mr. Fischer got his message across to them.

The OCEARCH goal is to “Educate, Inspire and Enable.” They are attaining this goal quite readily. Chris Fischer’s team just returned to the waters to continue their studies and to hopefully tag several male great whites this summer. Without a doubt, new data will be brought to light regarding our ocean life.

You can follow the OCEARCH results and view the Global Shark Tracker at www.ocearch.org. As I conclude this article I decided to track a female great white named Katherine. The results were quite informative and surprising.

Currently sending signals in the deeper waters off Nova Scotia, it seems that she not only visits Florida, but has been tracked into the Gulf of Mexico!

Thank you, Chris Fischer for your work, passion and inspiration!