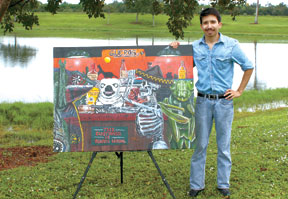 “I always get inspired when Day of the Dead comes around,” explains local artist, Esau Rodriguez. The holiday, el Dia de los Muertos, celebrates death as a transition rather than a finality. “It helps you realize that death is just a part of life and then you can see the comical side to it,” adds the 26-year old who has used the celebration as a muse for his canvas oil paintings. Bright colors, masks, whimsical skeleton figures or “calacas,” and sugar skulls are all a part of the Mexican tradition and are also incorporated into Esau’s artwork.

Born in Mexico, Rodriguez and his family moved to United States when he was just two years old. Growing up mixing Mexican and American traditions, he was not fully aware of el Dia de los Muertos until six years ago. “I was living in Gainesville and I was painting a whole bunch of random techniques, just trying to find my style, and I really couldn’t find anything. I started looking at skeletons and at this time and I didn’t know that much 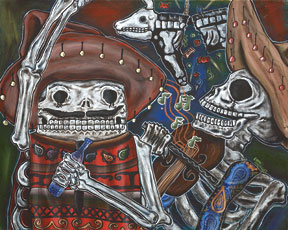 about the Day of the Dead. I became obsessed with it for a few months and I started doing artwork of comical skeletons and anamorphic animals in weird arrangements.”

Esau found his niche painting in the fashion of the 3,000 year old native tradition. The two-day holiday begins at midnight on November 1, also known as All Saints Day, and carries on through November 2. “On November 1, in the morning they celebrate “Dia de los Muertos Chiquitos” which is the Day of the Dead for children – those who have been taken too early in their lives. At night they celebrate the Night of the Mourning which is a time to reflect on people that died. In the morning, Dia de los Muertos starts and they celebrate all day. It’s the day for the dead to come back and have fun and spend time with their families.”

One of the most common customs is the making of elaborate altars to welcome departed spirits home. Vigils are held, and families often go to cemeteries to fix up the graves of their departed 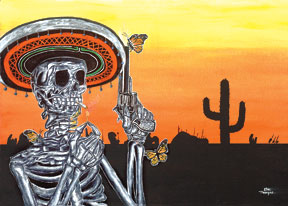 n his painting, “Days of the Dead,” “I imagined that the butterflies are the souls of people he’s taken,” explains Esau.

relatives. “They love having the holiday for kids, especially so they can learn at a young age that death is a part of life.”

Instead of fearing death, it is a time to embrace it. Such as in Esau’s first Dia de los Muertos inspired painting, “Cryptic Vengeance.” Having recently lost his dog, Guero, the painting is an homage to the white dog with glowing eyes who acts as bartender in the scene. Guero tends over a skeleton holding up a chameleon and a praying mantis casually sipping a beer in the corner. Esau even lists Guero’s favorite snacks on the “Specials” board.

The bright colors are echoed in his “Days of the Dead” piece where he imagines that the butterflies are the souls the skeleton has “collected.” His painting, “Fiesta de los Muertos” incorporates the lighter side of Dia de los Muertos.

The holiday is truly a celebration of the continuance of life after death. Through memories and artwork like that of Esau Rodriguez, the burden of death somehow seems lighter.

Read more about what inspires Esau Rodriguez in this edition’s Cancer Awareness section on page B13.