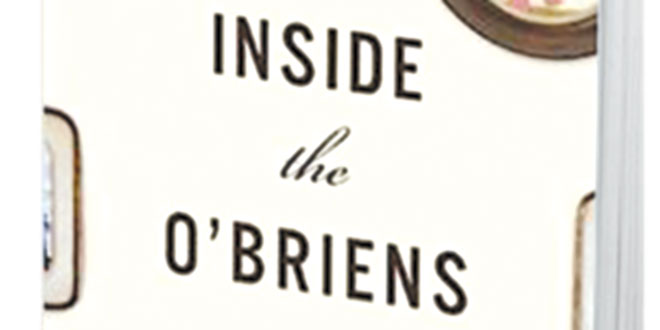 “The diseases which destroy a man are no less natural than the instincts which preserve him.” – George Santayana

Boston PD officer Joe O’Brien is frantic. If he does not find his service weapon RIGHT NOW, he will be late for roll call and he is already in hot water with his sergeant. He looks everywhere, retracing his steps and finally into the kitchen where his wife Rosie is serving breakfast to their four children. The Glock is on the kitchen counter. Each of them denies seeing or touching his weapon even though he knows one of them had to put it there. Feeling the rage boiling inside him, Joe grabs the skillet off the stove and hurls it across the room, splattering bacon grease everywhere and leaving a hole in the dry wall just behind the chair where his youngest teenager Katie is eating eggs and toast.

Thirty-six-year-old Joe’s uncontrollable rage is a behavioral manifestation of Huntington’s prodrome (Greek for running before or ahead of) which refers to symptoms or conditions that may signal the presence of a certain disease. Huntington’s cannot be officially diagnosed until physical symptoms are present – among them are jerking body movements, especially of the upper body. The disease is sometimes referred to as Huntington’s chorea (Greek for dance) because of these muscle symptoms. The patient can look like an uncoordinated marionette and tragically, his/her brain is numb to the activity and the patient is not even aware. That is, until they see the reaction of those around them. It will be almost another decade before Joe is diagnosed and can put a name to this thing that has invaded his body.

In the meantime, he unravels slowly and learns to cover his involuntary small muscle movements and occasional temper flares. Inside, he is worrying that he may have his mother’s disease – alcoholism. Joe and Rosie live in his parents’ home in Charlestown, a traditionally Irish Catholic neighborhood in Boston, and all the neighbors know “Ruth O’Brien drank herself to death.” The vivid memories of her drinking and the physical assaults that often followed were etched in his memory. Right alongside those memories were those of the last five years of her life, spent in the state hospital, wasting away, thinner and bonier at every Sunday visit, speaking incoherently but trying to communicate to her husband, daughter and son.

Inside The O’Briens is at once heartbreaking and incredibly inspiring. If you have read Lisa Genova’s Still Alice or Left Neglected, you know she is a talented storyteller who can simultaneously entertain and educate her reader. Huntington’s is a horrific debilitating disease. The O’Briens personalize it. Joe is in his mid 40s when he is diagnosed and learns just how bleak and short his future is. As overwhelmed as he feels about his own impending deterioration, he is plunged into despair at the thought that he might have passed the gene to his kids.

His four children, J.J., Patrick, Meghan, and Katie are in their 20s, just starting adulthood, still finding their sea legs so to speak. J.J. is happily married and looking forward to fatherhood. Meghan dances for the Boston Ballet and Katie is a yoga instructor and in her first “real” boyfriend relationship. Patrick is a bartender and a jokester, a bit irresponsible. Joe and Rosie break the news to the kids at Sunday dinner, including that they have the option of being tested. If the gene is present, they face the possibilities of not developing the disease, or 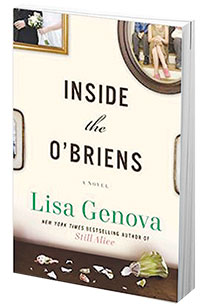 of manifesting symptoms around age 40. They make a pact to keep this information within the family. The exceptions to this are Joe’s two childhood friends, one another police officer, and the other a paramedic.

How this loving but genuine, flawed, fabulous family deals with this horrendous situation is gripping. Joe loses his position with the BPD, but with some dignity intact. He is still grieving the loss of his job, his identity for over 20 years, when two of the kids test positive for the gene. Two others do not take the test. Joe finally gets confirmation that his mother did have Huntington’s and the physical assaults were just the result of her uncontrolled movements. She did not drink herself to death because of course she there was no alcohol in that hospital for five years. The neighbors were wrong. But will they say the same thing about him and will his kids feel the shame he had felt his entire life?

Joe is on the brink of suicide using his service weapon, feeling it will be the best exit. His youngest, Katie, has a chat with him. She senses his despair. It is one of the loveliest father-daughter scenes I have ever read. Short, believable and incredibly poignant.

The story of the O’Brien family is that of struggling to live with impending devastation, faith renewed, faith lost, doubt, rebirth, hope, finding peace and dancing on the shadow of death. Eventually as Joe’s chorea advances, it is impossible to keep the news of his condition inside the family, so the O’Brien bunch goes public in their own inimitable way. Katie’s friend makes Joe a dozen tee shirts with various slogans on them. Genova’s description of a visit to Fenway Park is alternately delightfully humorous and touching.

She does not sanctify this family. The two sons argue at Sunday dinner about whose turn it is to scrape off the food stalactites hanging from the ceiling, formed by Joe’s choreiform movements. Rosie has a spiritual crisis while dealing with the idea of early widowhood and the fact that two of her children are known to be gene positive. Katie vacillates on moving to the west coast with her boyfriend. How they manage to each find his/her own way while becoming even stronger as a family unit is a remarkable story. This is not a tearjerker, but a story of ordinary people struck by genetic lightning who make the decision not to give up on life or each other.

The folk singer Woody Guthrie died of Huntington’s in 1967. His wife started a foundation for research on the disease. The US government has designated it an orphan disease because only about 200,000 Americans are affected by it. This means there is little incentive for pharmaceutical companies to do research and development. Approximately 10% of HD patients are people under age 20. Ms. Genova makes a plea at the end of the book for readers to consider donating to the research for HD by visiting her website for the link.

Rating: 4.0/5.0. Excellent selection for book discussion groups in my opinion. Can be preordered now at the usual places and will be published the first week of April.