Indians beat up on the Pilgrims 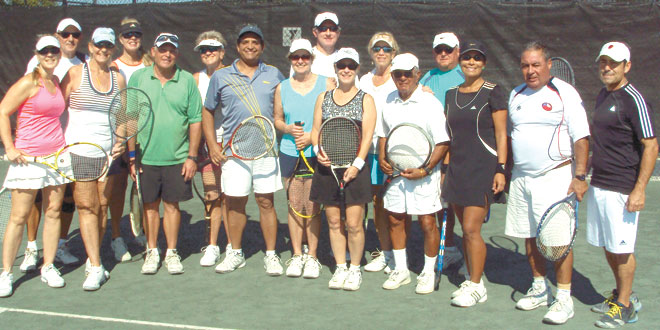 History tells us that the Indians and the Pilgrims sat down peaceably to share their first thanksgiving. Not so at the Marco Y where the Indians beat up on the Pilgrims and the only Turkey around was the Pilgrim team of tennis players. Saturday November 24 was the day, 8:30 AM was the time and the Marco Y was the battleground. Thirty-two players signed up (this was a sellout) for this innovative contest invented by Raul Saad, the Y’s Tennis Director. The tourney was held only two days after Thanksgiving, hence the clever matchup 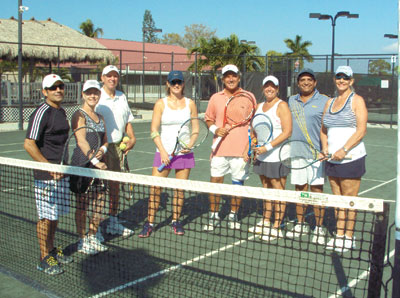 of teams called the Indians and the Pilgrims.

Raul devised a unique arrangement where he selected Mac Chaudry and Ed Neal as two leaders for the contest. They each were directed to take turns in selecting their team players from the list of all those who signed up. Chief Chaudry was to lead the brave Indians and Captain Neal was to direct the hardy group of Pilgrims.

The competition consisted of two rounds which involved two twelve game sets. Each match included a mandatory tie breaker so as to eliminate ties. First came the mens and womens doubles. Then the 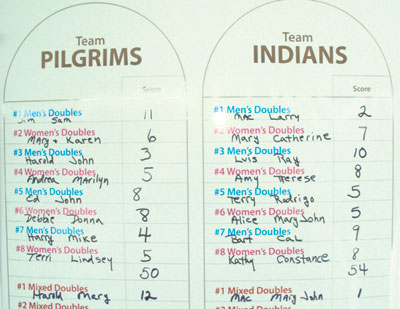 mixed doubles followed. The team winners were decided by cumulative points scoring. After the two rounds the scores for the teams were compiled. A play-off was scheduled to determine the ultimate winner.

The scoring in regulation time was as follows: Indians 118 – Pilgrims 94.

25 points were assigned to the play-off so whomever won this part of the contest would be designated the winner. This was a very enjoyable part of the event. The unique plan involved stationing all of the members of each team at the opposite base line of one court facing each other. All of the 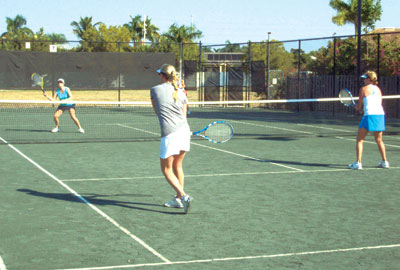 Pilgrims and all the Indians stood in line on their side as they waited from Raul to serve a ball to them. He started by alternately serving the ball to each team member. They were to keep the ball in play by returning the ball to the other team. When a player failed to return the ball they had to retire their racket. This continued until all rackets had been retired on one of the teams. At this time the opposite team was declared the winner and received the 25 points. The final score was Indians 143 and 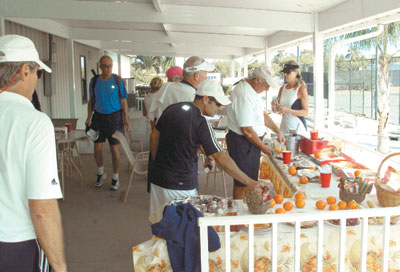 Breakfast before hitting the courts.

Pilgrims 94. The Indians were the winner. It was a tough battle but in the end, like our forefathers, the Pilgrims sat down with Indians to a post Thanksgiving feast on the verandah of the YMCA. All was well at the Y.

Thanks go to Yvette Benarroch, Andrea Washak, Ed Neal and John Ritchie, volunteers who helped prepare the facility and provide the refreshments. The staff of Betty Neville and Cheryl Orlando made a big contribution to the success of this fun day. Special thanks go to Raul Saad, for devising this unique contest that involved very competitive tennis in a really enjoyable atmosphere.