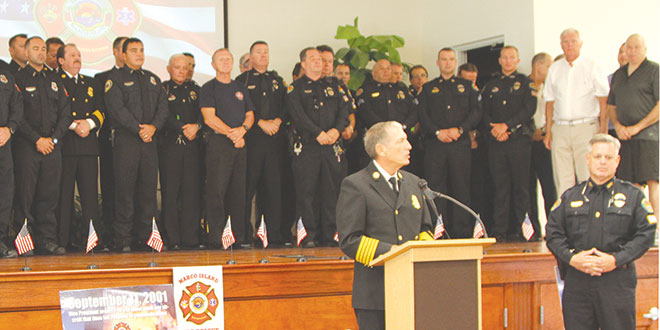 All stand for the Ringing of the Bells.

It’s been 13 years since the world changed forever with the attacks on our soil on Sept. 11, 2001. Each year, the Marco Island Fire Rescue Foundation pays homage to those events with a gathering. This year’s breakfast was held at San Marco Parish Hall.

Following brief comments by Dianna Dohm, president of the Fire Foundation, a short video was shown. The presentation was a compilation from “yet to be released” videos from the new 9/11 Memorial. It was a very somber event. Particularly touching were the shots of the final bodies recovered by the crews. A look at some of the museum exhibit items, like the back of a fire engine which had been completely destroyed, brought a gasp or two from those in attendance.

Chief Mike Murphy invited all of the 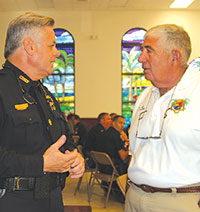 fire personnel, the police personnel and first responders to the stage. He then explained the tradition of the striking of the four-fives was formed long before pages and radios. When a firefighter died in the line of duty, it was tradition to honor him or her by ringing the bell five times in a set of four. In memory of those who lost their lives on 9/11, the bell was struck while all were silent.