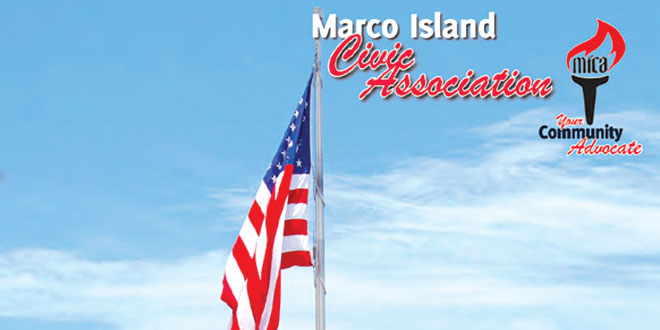 Roughly 15 years ago, the Marco Island Civic Association (MICA) released a Hurricane Preparation Guide. In June, board members decided to dust off the old guide and created a revised, refined and updated version. The new free, 16-page guide was available to the public at the end of July.

It was a labor of love for MICA member Jim Curran, taking eight weeks of research, writing and editing. The guide focuses solely on preparing for hurricanes on Marco Island. It includes a storm surge map of Marco, tips on how to prepare for a storm, an evacuation checklist, a listing of local media outlets and information on evacuations, hurricane shelters and securing businesses, boats, docks and swimming pools.

To help with the effort, Curran enlisted Jim von Rinteln, who has an extensive background in emergency operations management. As a helicopter pilot and senior staff officer in the U.S. Army, von Rinteln assisted the Federal Emergency Management Agency (FEMA) during hurricanes Iniki and Andrew in 1992. From there, he moved to Marco Island and went to work for Collier County, first as the emergency operations coordinator and then as emergency recovery coordinator. During his time with Collier County, 17 hurricanes blew through Marco Island, requiring evacuations.

“As times changed and information about hurricanes matured, the guide didn’t,” says von Rinteln. He sites hurricane preparedness myths that were in the original guide, including taping windows, leaving the attic hatch open and slicing lanai screens.

“The state has made great strides over the last 20 years in hurricane readiness, and I offered to help MICA. It progressed to putting together a guide that is Marco Island specific. We talk about boats and evacuations, about emergency responses. We are trying to walk the average citizen through what they need to think about when a hurricane is approaching,” he adds.

“It gives residents a schedule for preparedness, and if you are ready for a hurricane, you are 85 percent ready for 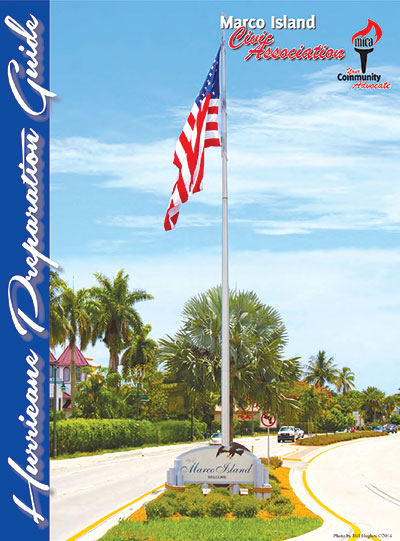 everything else. It is good to be prepared year round.”

According to Dick Adams, MICA’s president, the release of the new hurricane prep guide is part of MICA’s ongoing effort to change its image in the community. “Often, MICA has been viewed in the community as a policeman because of the deed restrictions, but that is not what we are all about. We are not a political body. We don’t endorse candidates. We hold events for the community at large,” explains Adams.

“MICA is one of the oldest and largest civic organizations in Florida, and we have really put our resources into community affairs in the last couple of years,” adds Adams. “It is about community activities versus community activism.”

To that end, MICA manages and maintains Residents’ Beach, sponsors City Council Town Hall Meetings, is the largest contributor to the city’s annual Fourth of July fireworks display, helps with monthly beach clean-ups, honors a local “Humanitarian of the Year” and assembles a discount program for MICA members. It also has donated funds to Veterans’ Memorial Park and the American flag at the base of the Jolley Bridge.

Currently, MICA is piggy-backing on the city of Marco Island’s new Thorguard Lightning Predication and Warning System at Residents’ Beach. The system alerts beachgoers when conditions are right for lightning and covers an area of beach stretching from the Marco Island Marriott Beach Resort north to Tigertail Beach.