Humanitarian of the Year: Al Bismonte 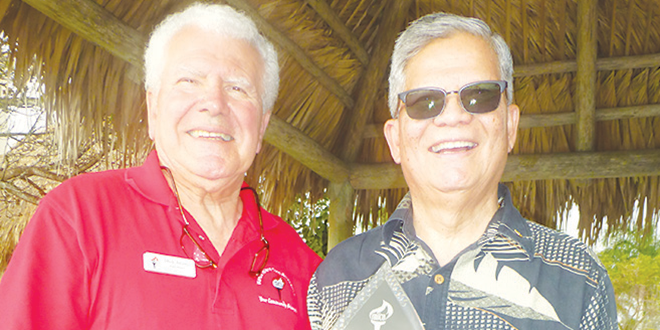 The Marco Island Civic Association Humanitarian of the Year award was developed in 1998 to honor the unsung heroes of Marco Island. It was recently announced the honor for 2015 goes to Al Bismonte. Al is a retired pediatrician. He still practices medicine and travels to Chicago for a couple of weeks each year to cover for his former partner while he goes on vacation. He prefers to get paid in the form of medicine so he can take it to his Mission in the Philippines where he spends three weeks every year opening a day clinic at his sister’s home in a rural part of the country. Over the three weeks, Al sees approximately 50-60 children per day and gives them the compassionate medical care they need. For those children that he does not have the proper medication, Al gives them a voucher to go to the only drugstore in the area to get what they need. Al then pays for all of the medicines. Why does Al do this each year? He wants to give back to the community that helped him on his way to become a doctor. In addition to treating the people that come to see him during his annual treks, Al’s family often feeds those that have travelled miles and their turn to see him.
Al is active in his Marco community as well. He is a member of the Knights of Columbus, where he has served as Grand
Knight for the Council and Faithful Navigator of the Assembly. He also serves as District Deputy responsible for all the Councils in Southern Collier County. Al is a Eucharistic Minister for San Marco Catholic Church and a member of the Noontime Rotary Club. He is a driver for St. Vincent DePaul, delivering meals
to the elderly and poor workers at the 6L Farms. He also drives the elderly to their doctor visits or for their weekly chemotherapy treatments for those who cannot drive and need assistance. Al is now a member of the Board of Directors of the Marco Island Civic Association! Al Bismonte is an outstanding, caring role model.