How to Catch a Snook 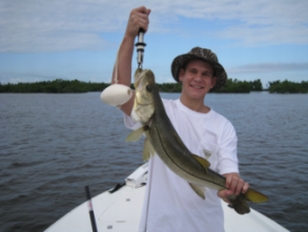 Prior to last Snook season I received a call from a gentleman that lives in the Tampa area.  After a very pleasant conversation,  he explained to me that he had an 18-year old grandson that loved to fish. His grandson had never caught a snook, and  had never eaten fresh fish! The object of coming all the way down to Chokoloskee was to catch his first Snook,  make a legal slot- sized Snook, and to cook it that same evening.  He asked if I was up for the challenge.  Of course I was!

Now there was a lot on the line here:  avid anglers know that fishing for the elusive Snook is quite a challenge, and catching one in the slot is quite a prestigious feat.  The rules state that the Snook must be  larger than 28 inches, but smaller than 33 inches.  That is a five-inch range.  These gentlemen were making  the four- hour  drive down to Chokoloskee, staying two nights in a motel, and booking me as their guide.  The pressure was on!

The day before the charter we spoke on the phone to re-confirm the charter, go over the weather forecast, and discuss our plan of action.  I was again reminded that the focus was to catch his grandson a legal  Snook.  He had a very serious tone in his voice.  I heard him loudly and clearly.

The next morning we met up at the marina at 7:00 a.m.,  shook hands,  and guess what I was reminded of while still in his clutch: “Catch my grandson a Snook!”

After a safety gear briefing, we loaded up and off we went.  The two of them were discussing Snook recipes and the ingredients that they brought with them from Tampa.  It involved olive oil, panko bread crumbs, tomatoes, garlic, squash, rice, and some other goodies.  I began to salivate hearing all of this, but that quickly turned into butterflies thinking about the chance of us not bringing home a Snook.  I am a very positive captain.  My clients will tell you that I never give up hope because the ‘big one’ is out there and the chance of hooking up to him only increases with each cast.

On the way to my bait spot, I could see a large commotion of white water in the distance. There was some sort of frenzy going on.  What it was, we had no idea — that is, until we got closer.   It was amazing: a large school of 100-plus pound Tarpon feeding on a school of Ladyfish. The Tarpon were coming five feet out of the water with 12-inch Ladyfish hanging out of their mouths.  I have seen this before, but not often.  All you have to do is toss a ladyfish out on a big circle hook and your chance of hooking up is nearly 100%.  This is a once in a lifetime  opportunity for many anglers.  By force of habit, I stopped the boat, grabbed the cast net, got 20 Ladyfish on the first throw, and went to open the livewell to place them in.

The grandfather said to me in a stern voice, “What are you doing?”.

I bowed my head, smiled, and threw all of the Ladyfish back into the water.  We sat down, started up the boat, and drove away from the frenzy.  I looked back four or five times to see the Tarpon continue to feed heavily.  One cannot imagine the thoughts going through my head as we got further and further away.

We pulled into the next cove, threw the cast net and filled the livewell with finger-sized mullet, and continued to my first Snook spot of the morning.

I told the grandson, take this rod and pitch this mullet right into that hole in the mangrove.  He did exactly what I told him, and within 20 seconds of that first cast, he was battling his first ever Snook. It was 30 inches!  Mission accomplished at 7:45 a.m!