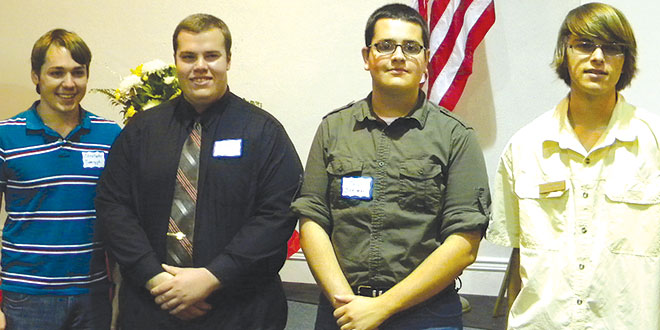 Niemczyk, who is studying accounting and music, played his guitar as luncheon attendees arrived. His mother, Donna, expressed her gratitude to MIFA, “We appreciate everything you guys do for the kids on Marco Island. It means so much to them that they’ve got your support and you’re watching out for them. When they say it takes a community to raise a kid, it’s true.”

“I feel really fortunate to have such a great organization out there to help students reach their dreams,” said Niemczyk.

This is MacDonald’s second consecutive year as a scholarship recipient. He has been doing art shows since the age of 13, and his first show was with MIFA, which his mother credits for starting him on the path he’s on today.

“I’m so glad I found art at a young age, and this scholarship is only going to help me further,” said MacDonald.

“I’m really honored and happy that they gave me the scholarship. It’s nice having people who understand what we’re going through,” said Schimek.

Lunch was accompanied by a xylophone performance courtesy of Stein. “It’s nice to know that I still have support back home,” he said.

“And today is exciting for us too,” said Stein’s mother, Sandy. “Malenda is the one who encouraged him to apply, so this feels personal.”

The dual-purpose luncheon also celebrated local artist, Malenda Trick, who was honored as Artist of the Year.

“This is the first time they’ve awarded it, and I think it’s neat! It blew my mind 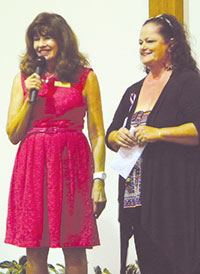 when they told me,” said Trick. “I just feel blessed to be part of this community. There are a lot of lovely people in MIFA supporting local art.”

Born in Ohio, Trick, a classical impressionist artist, moved from Nashville to Marco Island 11 years ago. She has been painting for 60 years, creating more than 40,000 paintings in her lifetime. Her Marco Island gallery is filled from floor to ceiling with her works.

“I sold my first piece of art for a nickel at the age of three; the man who bought it said I should never give away my art,” said Trick.

In 2010, she painted portraits for 20 local veterans of WWII, the Korean War and Vietnam; she repeated this project in 2014 for 15 veterans in Sarasota, FL.

During the luncheon, Trick shared her plans for a special project planned for Marco Island this summer. “It will be a two-sided, 18-foot, reasonably permanent memorial. On one side will be the veterans of Florida because we chased submarines off our shores during WWII, and the other side will show American endeavors over-seas,” she said.

Lori Wagor of the Marco Island Historical Society surprised Trick with the news that the board plans to fully fund her project. The painting will be done at the Natural History Museum. Anyone who is Florida military is being asked to donate photos for the project.

MIFA is a charitable, nonprofit organization that was started in 2003. With nearly 100 members, they continue to grow each year. Their mission is to support the visual, literary and performing arts in public places on Marco Island. They see the arts as a catalyst to bringing people together, creating a sense of community, engaging people, stirring imaginations and inspiring dialogue about the meaning of art.