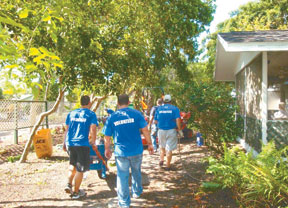 A more honorable tribute to Memorial Day could not have been found for Frank Jerome, a 95 year old Navy veteran living on Marco Island. Frank is known to many as a guard at Hideaway Beach where he worked for over 20 years. A World War II Navy veteran and torpedo man, Frank awoke Saturday morning at 7:00 AM to a group of volunteers at his door. Many of those volunteers were veterans themselves. Their mission was clear; to 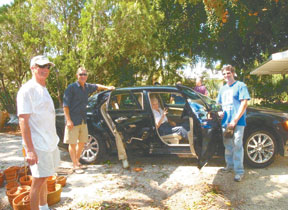 help an elderly veteran with yard work which had, in this tropical climate, been too much for him to manage.

A multitude of yard bags, tree branches and yard waste filled the drive as two dumpsters were brought in by Waste Management were being loaded to haul it away. The entire yard had been raked clear and new mulch put down. Bill Filbin manned a pressure washer to clean a patio area and fencing. “This was a group effort,” said Bill, the past president 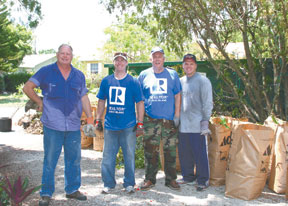 of the Marco Island Area Association of Realtors. “Liz Carr and Patrick Heyman from the City of Marco’s Code Department helped the Board of Realtors identify the need. Jim Lang and the VFW assisted in the effort. Marco Police Department’s Sgt. Williams was a big help. His wife Lisa, a nurse, comes in almost daily to help Frank sort out his meds and take him to doctor’s appointments as needed. The Board of Realtors of course strongly supported the effort, current Board President 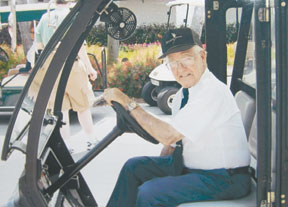 From Frank’s days at Hideaway.

Gerry Rosenblum worked, as did a number of realtors. Police Chief Don Hunter pulled dead branches and vines as did retired Chief Thom Carr. Affordable Landscaping came in with equipment and helped cleared many of the larger trees. Jim Prange was kind enough to arrange to take Frank to Hideaway Beach to enjoy lunch while we worked.”

In addition to yard work, Mike Boland installed a new 32” flat screen television for Frank as a surprise. The new television had a built-in DVD player

so it would be easy to watch his favorite movies without worrying about which buttons to press on the remote. “Several of us pitched in and we bought movies with his favorite actors Clint Eastwood, John Wayne and even Frank Sinatra.” Near the television, a new device was being installed which would flash when the phone rang.

With so many hands the work went quickly and the group made a huge impact. “Helping Frank was a wonderful way for us to honor Memorial Day,” said Ed Lewis, Island Maintenance Services.