Fourteen year old Marco Island resident, Andrew Smith, is on his way to earning an Eagle Scout badge. Living in the Caxambas area, Smith found a passion for archaeology thanks to the artifact-rich environment which surrounds him. In order to earn his Eagle Scout badge, Andrew must participate in a special project and

Andrew empties a bucket of dirt and artifacts as Gene Erjavec shakes the sifter.

donate community service hours. The history buff chose to stick with his passion in completing these assignments.

For Andrew’s special project, he elected to refurbish the island’s historical markers. This involved clipping and weeding the area around each marker where required, and the cleaning and polishing of the markers themselves for better readability.

Andrew has also volunteered to assist 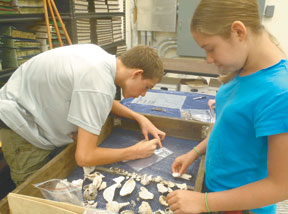 Andrew sorts through artifacts with help from his sister, Emily. SUBMITTED PHOTOS

with the current archaeological work going on in Caxambas. He has been on-site as much as possible, helping with the dig, cleaning and categorizing the massive amount of artifacts being discovered.

Andrew’s service to the community is to be admired. The Marco Island Historical Society applauds his efforts and hopes his dedication will attract other young people to become involved with the Society.