Hiking with Henry Lowe: Part Two North of the Isles of Capri 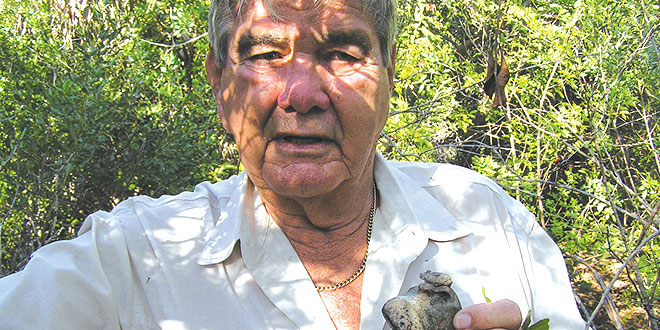 Heading north of Isles of Capri on the hiking trail that was formerly the old Marco Road, I was joined by Henry Lowe and Steve Purcell in an expedition to locate and explore Henry’s former home site, which his family occupied starting in 1939. The old Marco Road began from its intersection with U.S. 41, in the location of today’s Hitching Post, and ended at a ferry crossing in the current Isles of Capri. The road was built around 1912 as part of the Naples-Marco segment of the developing Tamiami Trail which by 1915 was described as “a major road-building project for South Florida.”

Just north of Henderson Creek in the areas today known as Tower Road and Manatee Road was the Belle Meade settlement, while continuing south on the old Marco Road one encountered the “Marco Junction” intersection. Heading east from the Marco Junction led down a very long road that meandered southeasterly thru what is now Fiddler’s Creek to Royal Palm Hammock. Today, interestingly enough, the eastern part of that old road is still open as a public hiking trail located within the boundary of Collier Seminole State Park and access can be made via a marked trailhead off of U.S. 41 north of the park entrance. Also from the Marco Junction, one could head west on what would later become paved as Shell Island Road leading toward prehistoric shell mounds where a number of families lived and a fishing camp operated.

The importance of the old Marco Road changed dramatically in 1938 when the depression era Works Progress Administration (WPA) helped to dismantle a swing bridge that had formerly crossed the Caloosahatchee River and reconstructed it near Goodland to physically connect Marco Island to the mainland via S.R. 92 (the current San Marco Road) providing a direct road connection to U.S. 41 at Royal Palm Hammock.

In 1939, a car was not in the Lowe budget, but was also of no value to them as the Marco ferry had closed shortly after the Goodland Bridge opened a year earlier, and because of the burning of the Mcilvane Bridge, which formerly ran to the north, the Lowe home was in an isolated area situated north 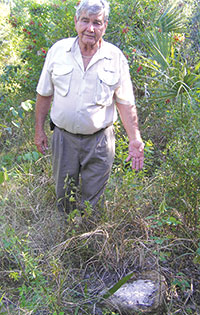 Henry Lowe points out the foundation corner of his family’s home located off of the old Marco Road.

of the future Isles of Capri Blvd. Henry’s father, George, commuted to work by taking a long walk to the old ferry landing and taking a skiff across to Old Marco. WWII started for the U.S. in December 1941. In Old Marco, the U.S. Navy set up an Air Sea Rescue operation which provided support for the Naples Air base as well as the Buckingham Army Air Training Base. The navy also patrolled the coast looking for enemy German vessels and submarines. George Lowe, so as to not violate curfew during the war, was required to cross the Big Marco River before dark each night. When he was running late and was challenged by the navy sailors, Henry recalls his father would yell out: “It’s just me, George Lowe, rowing home.”

Although George Lowe met the age requirements during the war, he was exempt from the draft. Why? Because he was classified by the Government as working for an essential industry. At first, it seems odd that his employment in the “bee keeping business” would be classified as essential, until one realizes that honey was not as important to the military effort as beeswax was. It was harvested, put in drums and shipped off of Marco Island by railroad. Beeswax was used as a sealant and also as a lubricant for large bore guns by the Army and also by the Navy on warships.

As we walked around the old Lowe homestead, we found some trash piles near large live oak trees. Henry spotted part of an old carbide light, an early invention that used granules placed in the bottom container with water above and a valve to regulate the flow. Dripping water created a gas that escaped up a tube where it was lit to make a spot light. Also found in the garbage were old auto parts, an ignition coil and an oil filter grate, not unusual since we were not far from what had once been the “highway to Marco”; it helped tremendously to have Henry, a trained mechanic, along to analyze small obscure parts.

As we walked back the old Marco Road toward modern day Isles of Capri, Henry explained that in 1944 his parents 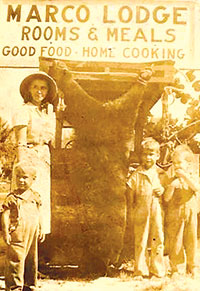 decided, with three small children living in the woods and a fourth one on the way (Glenn), they needed to move to Old Marco. They rented a house not far from the Old Marco Inn, next door to the Dickerson family, where they shared a garbage pit and a five-hole outhouse. It had three holes for Dickerson’s family and two for Lowe’s family with a partition dividing them. Like other pioneers, they used their Sears Roebuck catalog for toilet paper, pulling the pages diagonally down and spreading the book open on its spine so that the pages did not mildew together or rot in the high humidity. Henry commented it was a bad day when the catalog came printed on glossy paper.

Their rented Marco house, costing $2 a month, was built in the 1920s, with windows open for air and “cooling,” but screened and closed for bugs. It was subsistence living, as most pioneers hunted and fished as a way to provide food for their families. Henry mentioned how his father, George, had shot a large bear that had been a problem near some of the beehives and brought it back to Old Marco. His father skinned the bear and kept the hide while the meat was prepared by Henry’s mother and their neighbor Mrs. Dickerson. It feed everyone in town for a few days. Henry recalls his father would take him and his brother, Jon, by boat over to the bird islands (or the A,B,C Islands to the east of today’s Jolley Bridge) where George would use a shotgun to shoot curlew (also known as ibis or Chokoloskee chicken) and the boys would swim out to retrieve them. Occasionally, George would bring home a gopher tortoise or sea turtle.

Henry related to us how he, his older sister and younger brothers had attended the old Scripps School in Caxambas (located at the west end of current Ludlow Rd). The school had four classrooms, two upstairs and two down, and taught multiple grades in each room. Henry said that to escape, after Henry and his friends teased girls and pulled their hair, the boys would run out into the sand spurs being sure to land their feet 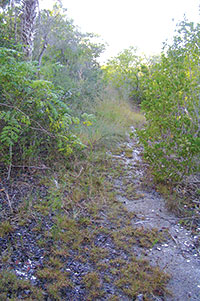 in the middle of each plant to avoid the spurs. He said many of the school children did not wear shoes and developed very tough skin on their feet.

The School Board provided a very old school bus to transport children from Old Marco. The road headed south of Old Marco through the cemetery, down what is now Bald Eagle Dr., crossed S.R.92 at where City Hall is now, continued thru the Barfield farm (later the area was known as the “pines”), and then the road narrowed to cross a mangrove swamp in the area of present day Orleans Court before connecting to the road in Caxambas (now Inlet) heading to the school. One late afternoon, some tourists had stopped their car in the road to get out and watch raccoons feeding on an oyster bed in the mangrove swamp area. The bus driver, with about 15 kids heading home to Old Marco, quickly tried to stop and ended up flipping the bus over on its side. No one was hurt, and in the days before cell phones, Henry and his classmates climbed out of the windows and thought nothing of walking home across almost the entire island, even though some were barefoot.

After WW II was over, around 1949, the Lowe family moved to Naples. George’s job had been impacted when the market for beeswax collapsed as a result of the invention of synthetic paraffin made from coal. The children went to Gulfview School in Naples, and Henry graduated from Naples High School in 1956. After graduation, he became a boat mechanic. After 12 years working at the Outboard Marine Corporation (OMC) test center in Naples, Henry returned to Marco Island, and, with his brother Jim, started Lowes Marina in 1968. The marina was located next door to what would later become O’Sheas Restaurant in the location where Pier 81 is now. Two years later, Henry and Jim were offered a 49 percent share of Marco River Marina (now Rose Marina) to take over the management; Henry started there in 1970 earning an $11,000 annual salary. Later, he would move back to Naples, to the Keys and then back to living in Old Marco, but always staying 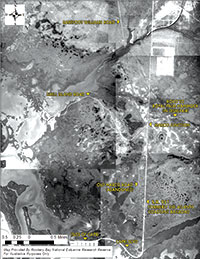 1962 aerial map shows S.R. 951 (the old ACL Railroad), the Marco Junction, Shell Island Road and the Road to Royal Palm Hammock fading out from disuse, as well as the old Marco Road, again faintly seen due to disrepair. The filled causeway “Capri Blvd” from S.R. 951 to Isles of Capri is shown at the bottom of the photo. PHOTO BY JILL SCHMID, ROOKERY BAY

in the marina and boat business. Henry currently owns Lowes Marine Sales, a boat brokerage business in the Isles of Capri located, amazingly, just a few miles down the road from where he once lived as a child 75 years ago.

Meanwhile, today the north portion of the old Marco Road continues to be used as Barefoot Williams Road, named after a man who bottled and sold oysters and lived not far from the old high bridge that once crossed Henderson Creek and burned in the late 1930s. Portions of the old Marco Road south of Henderson Creek are used by Lee County Electric Cooperative to run power transmission lines from their Belle Meade station south to Marco Island. In 1955, “Doc” Loach purchased the four islands that he would later make into the “Isles of Capri.” Loach started with an abandoned road, known as the old Marco Road, which already bisected the mangrove islands and provided potential access to his development. The old Marco Road had fallen into disrepair over the years eventually being labeled as “primitive.” Wisely realizing that the old Marco Road was too prone to flooding and no longer a feasible option to gain access north to U.S. 41, Loach connected what is now Capri Boulevard via a filled causeway across Mcilvane Bay joining it to the solid roadbed of the old Atlantic Coast Line Railroad and constructed what is now S.R. 951.

Henry explained that around 1975 he and several islanders were talking about a celebration for Marco’s 10th anniversary. Henry interjected that the island was more than 100 years old and the celebration of the Mackle Brothers opening of Marco Island in 1965 was not the start of the Island, so he suggested that the anniversary of “Modern Marco” was a more fitting name. So, next year, in 2015 as we celebrate 50 years of Modern Marco, we reflect back on the pioneers who struggled to make this island their home.

I want to thank Henry Lowe for his memories and our friendship over many years. In addition, I thank Steve Purcell for hiking with us, and also Faye Dickerson Brown for her knowledge and assistance, and to Steve Bertone and Jill Schmid of Rookery Bay for their contributions to this article.