Hiking with Henry Lowe: North of the Isles of Capri 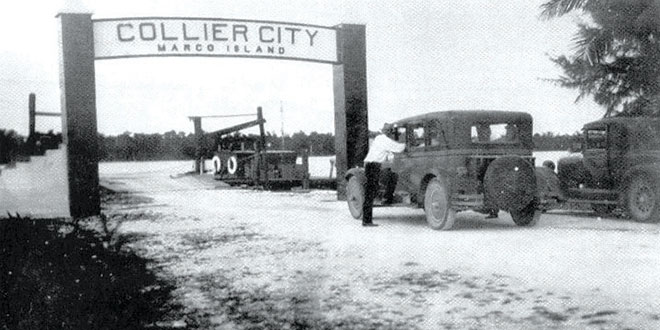 A conversation led to my taking a walk in the woods with Henry Lowe accompanied by Steve Purcell. We were on an expedition to hike the 1912 old Marco Road and seek out the location where Henry had lived as a child. Armed with bug spray, we headed north of Capri Boulevard and followed a hiking trail into the Rookery Bay National Estuarine Research Preserve. We quickly found that the trail was not used much as we were forced to climb over fallen trees, push through dense brush and fight heavy vines. Henry pointed out broken clam shells, purposely put there, making no doubt that we were on the roadbed of the old Marco Road. Realizing that no known clam factory had been located north of us, it led to the conclusion that the clams used to fortify the road must have been brought in by vehicles that crossed the Marco River from the Doxsee Clam Factory, which opened in 1910. Near the road were narrow canals and ponds full of standing water, dug to create the slight rise we were standing on above the adjacent grade. Walking up the old Marco Road gave me a creepy feeling as I recalled a story I had written for this newspaper of Deputy J.H. Cox and his wife and two children being led to their deaths by bootleggers who had taken them up this same road in February of 1925.

As we headed east, Henry began to reminisce about his family and what life had once been like. Henry’s mother, Frances (McVeigh), had previously been married and had a daughter Charlotte, when in 1937 she married George Henry Lowe, Jr. George and Frances married to the disapproval of both of their parents, so after Henry was born on December 29, 1938, in Seffner, Florida (near Tampa), and before his first birthday, the family of four moved to this homestead. The move had been prompted by George getting a job with Tommie Barfield to tend bees and collect honey. It was a good job in the middle of the Great Depression. The Barfields owned a farm located in the center of Marco Island of about 20 acres (currently in the location of Mackle Park and the streets northeast of it) and they also had bee operations off of the Island. In one good year (1942), they shipped 60,000 pounds of honey.

As we walked closer to the location of his old homestead, Henry got more excited pointing out a clearing

near where his family had lived. He remembered the clearing as having been a high spot and open with lots of mango and coconut trees. After a search in the bushes, we found the first corner foundation of their home: an “L” shaped tabby mortar footer. Soon we found two other house corners, supporting what had once been a typical Florida cracker home — similar to the few houses that now survive on the east side of north Bald Eagle Drive. Henry was just a baby in diapers when they moved to these woods, and his mother had two children born while they lived here — his brothers Jon and Jim — both delivered by a midwife in this home. At the time, the Lowe’s homesite was very remote as the old Marco Road was no longer passable to the north since the old wooden Mcilvane Bay Bridge had mysteriously burned shortly after the Goodland swing bridge opened in 1938. Henry remembered only one other neighbor, a fisherman who lived in a structure the size of an outhouse north of them on the shore of Mcilvane Bay; they saw very little of him as he usually fished north toward Henderson Creek.

A flood of memories came over Henry when we saw an old fire pit; he related how his older sister, Charlotte, had almost died. The salt water mosquitoes in nearby marshes were almost unbearable so the family kept smudge pots burning continually. The children were raised to know not to stand in a doorway — you were either in or out. Window screens were “painted” with kerosene to keep sand flies (or “no-see-ums”) out. Little Charlotte, around age eight, ran instinctively into the smoke from an outdoor fire to escape the mosquitoes; she had no idea that burning in the fire were mango trees and possibly poison ivy. Toxic smoke overwhelmed her, and Henry relayed that her exposed skin and lungs were immediately enflamed. She almost died, and her mother spent many months nursing Charlotte through recovery. Henry, seeing a coconut tree, remembered that there were happier times as well, and told how he had tried to climb a coconut tree, with a plan to use an umbrella to hook a coconut and pull it off, but both he and his umbrella fell to the ground. Henry did not think that locals made much money by selling mangos or coconuts as every family had plenty of trees. Research later revealed that Sam Williams, who had arrived in 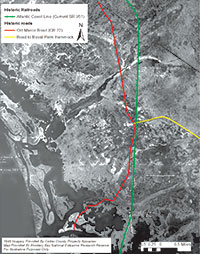 the Rookery Bay area in 1882, had many years before planted and established his mango and citrus groves in this area.

We often drive by history, oblivious to what was once around us, yet we rarely give thought to the past or who might have lived there. How many times have you driven Capri Boulevard and never thought twice about it? Yet most of today’s Capri Road was once the principal access to Marco. The old Marco Road (County Road 22) left Capri Blvd heading north and ran west of the current SR 951 to cross Henderson Creek and connect at the northern end to what we know now as Barefoot Williams Road, but previously was called the Belle Meade Rd (C.R.24). A 2003 report done by the State suggested that the old Marco Road is in the location of “an old military or aboriginal trail” shown on a Seminole War map from 1856. In 1915, the old Marco Road was described as being “…a narrow winding road southward to Marco Pass (that) was open at times…,” the major problem being at high tides and during storms water overtopped the road stopping all travel until it drained. This condition prompted the citizens of Marco to support a May 1915 $177,500 bond issue supporting Road and Bridge District #1 to acquire a 50-foot right of way from Ft. Myers to Marco. The bond was also to pay for a graded road between Naples and Marco.

On September 6, 1917, A.H. Andrew, editor of the “American Eagle” newspaper in Estero, decided to walk from Naples to Marco and found 16 bridges before he got to a high wooden bridge at Henderson Creek. He also found that the road would never withstand the pressures of water that were washing out parts of it. He wrote in 1918 that Marco had 15 automobiles, 14 of them Fords; which were a lot of cars considering that Marco Island only had five miles of road and was accessible only via a one-car ferry!

Probably the best description of the old Marco Road was in 1921 by naturalist Charles Torrey Simpson who had caught a mail bus from Ft. Myers to get to Caxambas. He found the first part of the trip was through “flatwoods and pines forest,” but further south he found: “The trees were small and thickly set, growing in a muddy sand that … overflowed in wet weather…. A track had been cut out barely wide enough for the passage of a car, and 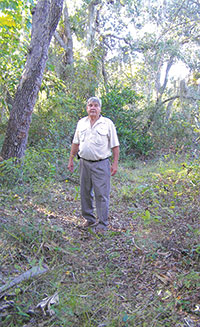 Henry Lowe stands in the location of his old homesite. SUBMITTED PHOTO

our machine constantly dodged from side to side to avoid the larger trees and stumps. In all my life I never saw a narrower or more zigzag road…The driver ran his car at the rate of twenty miles an hour and the lateral motion made us feel as though we were pygmies shaken in a sieve.” Simpson goes further to state that while the driver clung to the wheel, the five passengers held on to the car and clung to each other, the result being that “we were thrown violently in every direction a dozen times a minute. One of our party, a Florida cracker, dryly remarked after an unusually difficult performance, ‘I reckon thish hyer road is thist nacherly drunk’ (Translated: “I reckon this here road is just naturally drunk!”). Finally, at the end of what is now Isles of Capri Road, they came out “…among buttonwood and mangroves and received a different kind of shaking. We ran on to a novel ferry boat at Marco channel, just big enough to hold an auto with not an inch to spare. The pass was deep and wide and through it the tide swept swiftly. We feared that the little launch which towed us might not be able to perform its task, but after being carried far with the current we got into stiller water and ran to the opposite landing at the pretty village of Marco.” The best part of the trip seems to have been heading south across Marco Island described as, “a run of five miles… through pine forest and the rest over lofty sand dunes… into the little settlement called Caxambas.”

In 1925, due to the political influence of Tommie Barfield, the new Collier County authorized a four-car ferry that was self-powered and carried cars from the Isles of Capri side of the Big Marco River directly across to the landing near the current day docks of Ville de Marco. On the Marco side, the ferry would land, and cars drove down Royal Palm Boulevard located to the west of the Old Marco Inn and east of the old G & G Mercantile Store.

“Hiking with Henry Lowe” to be continued in the next edition.

I want to thank Henry Lowe for his memories and our friendship over many years. In addition, I thank Steve Purcell for his photos and for hiking with us, and also Faye Dickerson Brown for her information on Belle Meade and to Steve Bertone and Jill Schmid of Rookery Bay for their contributions to this article.

One response to “Hiking with Henry Lowe: North of the Isles of Capri”