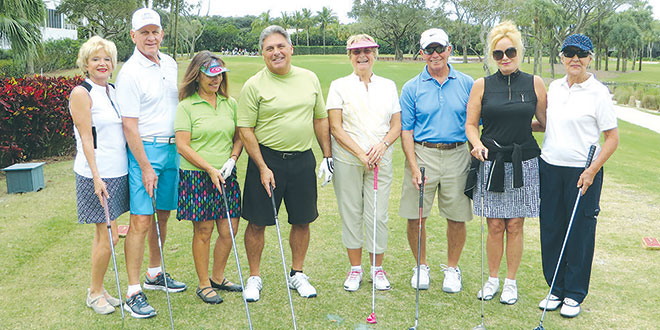 Hideaway Beach fundraised a record amount recently at its first Courts and Course Against Cancer. Combining residents’ love of tennis and golf with philanthropy was so successful that participants have already begun discussing next year’s event.

The weekend started with a full day of tennis. Tennis pros from throughout Southwest Florida taught and entertained players and spectators. Residents attended morning clinics, and a pro/am tournament in the afternoon. An exhibition by a number of the professional

Day two was for Hideaway’s many golf enthusiasts. More funds were raised through the exciting golf ball drop of an astounding 400 balls. The Marco Island Fire-Rescue Department assisted in this endeavor. One of the many generous donations by residents included a bid of $1,000 for the honor of climbing to the top of the aerial ladder to drop the balls. The crowd cheered as four of the balls

Tennis lovers had fun playing, all while raising funds to fight cancer.

dropped into the cup. Goofy Golf followed. Twelve teams of eight played on the beautiful Hideaway course, with rules specially designed by pro Todd Elliott, just for the event.

The weekend fundraiser culminated in a dinner and auction at the Hideaway Clubhouse, where the day’s winners were recognized, and the fundraising continued.

Hideaway’s residents were honored recently for their philanthropic efforts. All funds raised at the Courts and Course Against Cancer will benefit the local office of the American Cancer Association.