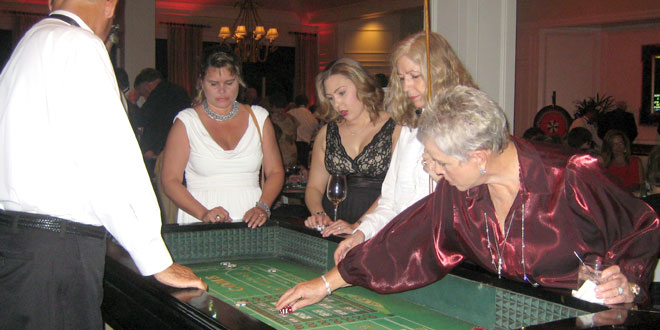 Members of Hideaway Beach have a long history of backing the efforts of the local chapter of the American Cancer Society, but this year, they raised the stakes, literally, with a Vegas-style fundraiser on January 27th. “In the past, we’ve done traditional golf outings with a silent/live auction and a dinner, 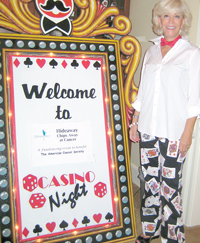 Susan Gardner gets into the spirit of the evening.

but we wanted to do something different this year,” says event co-chair Debbie Shade. The committee researched casino-night fundraisers and found they had an excellent track record of raising money.

The Hideaway Beach clubhouse was transformed into a casino game floor with card tables, horse racing on large-screen TV’s and two slot machines. There 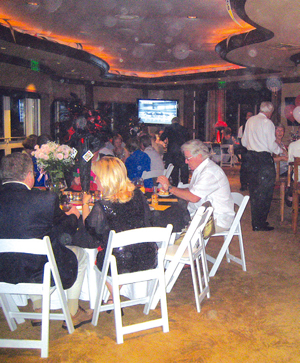 A packed house with horseracing in the background.

were grand prizes for ‘high-rollers’ and auction items as well. Attendees purchased game chips to play, with the ‘real’ money going back to the Cancer Society.

“Casino Night was a huge success.” Lisa Honig is the executive director for the Marco Island Unit of the American Cancer Society. She attended the event with Cancer 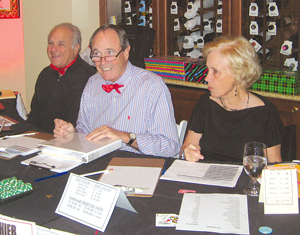 Society staffers and was thrilled to see the group’s hard work pay off with a packed clubhouse of 172 reservations. “The American Cancer Society congratulates all of the Hideaway organizers, volunteers and residents for their generosity and support.”

The grand total of monies going directly to ACS was $110,000 as of press time, with 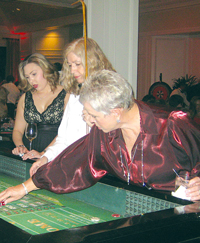 Placing bets at a gaming table. PHOTOS BY DANIELLE DODDER

final amounts still being tallied, according to Debbie Shade.

The lighthearted fun the group injects into this annual event almost belies the implacable determination that drives it. “It’s a labor of love,” says committee member and event organizer Tommie Rowland. “Everyone here has been affected in some way by this horrible disease and we want to see it eradicated during our lifetime!”