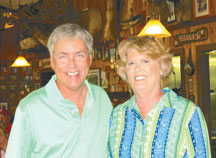 Carl Hiaasen is a modern day muckraker, only with love for off-beat characters, and a deft comic touch. 150 Floridians were treated to his candid views of the destruction of the Florida wilderness at a gathering at the Oyster House in Everglades City on April 14th. The occasion was a fundraising effort to assist the historic Ted Smallwood Store in its fight to survive the onslaught of unfettered development. And the effort succeeded.

Exactly a year ago – April 14, 2011 – bulldozers tore up the roadway providing access to the store, and a legal battle began that persists today. The developers lost in the lower court, but have appealed and the case continues.

Mr. Hiaasen has long been a fighter to preserve the remarkable and unique natural paradise that is Florida. He fights through newspaper columns and a series of witty, satirical mystery novels with characters ranging from a one-eyed ex-governor (“Skink”) of Florida who fled into the wilderness in disgust with Florida politics, to a guy named Twilly Spree who dedicated himself to battling wilderness destruction in “Sick Puppy” to Congressman David Dilbeck, who was addicted to strippers, female of course, in “Striptease,” with any number of strange birds scattered through all of his wild stories. As he said in Everglades City, the “recurring character” in all of his books is Florida. He added, “In this state, just when you’ve seen it all, something else happens.”

This wasn’t Mr. Hiaasen’s first visit to this part of the Everglades. He’s been fishing here for years. Steve Huff, an inductee into the Fly Fisherman’s Hall of Fame was at the gathering. Mr. Huff has often guided Mr. Hiaasen through backwaters unknown to almost anyone else, except some very friendly (?) gators.

His love of Florida doesn’t extend to miles of concrete, notably I-95 on the east coast, and 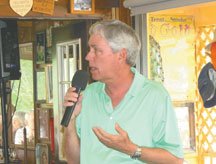 the other Florida style equivalents of strip mining – only without mineral deposits under the roads.

The morning meeting was a smash hit. Mr. Hiaasen answered numerous questions, even delivering a somewhat restrained view of what Hollywood writers can do to a manuscript. It went something to the effect of handling stuff in a “Charles Manson Daycare Center.” If that’s not an understatement, what is?

The Oyster House was packed full of Carl Hiaasen’s fans on Saturday, April 14, in support of the Smallwood Store. Guests from all around South Florida filled the restaurant to meet and share breakfast with the noted Miami Herald columnist. Carl arrived shortly after 9:30 AM and immediately greeted guests with a handshake and a smile. He went table to table in the far second room that had to be opened to accommodate the overflowing crowd. After a breakfast of pancakes and fruit, the audience listened to Carl talk about the plight of the Smallwood Store and other historic sights that have been threatened by developers. It was on April 14 one year ago that Florida-Georgia Grove LLP appeared at daybreak to bulldoze the only road accessible to the 106-year old store. During its closure the museum suffered a significant loss of income and has also incurred enormous legal costs in the fight to reopen the road. If you would like to donate and help, please send a check payable to Ted Smallwood Store, Inc., to P.O. Box 310, Chokoloskee, FL 34138 or visit their website at www.smallwoodstore.com. This fundraiser was considered a great success with the money that was raised, by the awareness that it brought to the Smallwood Store, and the comments the organizers received after the event about their excitement in meeting Carl Hiaasen. He is a true Floridian who believes is preserving our heritage and conserving our resources.