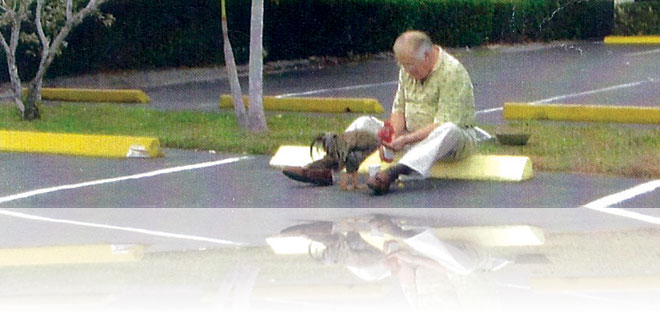 Coastal Breeze News has received several requests for an update on Marco’s own rooster, Henry, who lived in the hedges and bushes along the former Calusa Gardens Plaza, now the new home of Chase Bank on North Collier Blvd. We turned to one of Henry’s best friends, Ben Wolfe, for current news about Henry. Here are Ben’s recollections of his friendship with Henry and his latest adventure.

I was first introduced to Henry about three years ago by Diane Baker, office manager for Dr. Joe Vickaryous, whose offices were located at Calusa and Ann Rudolph, owner of the former Zsa Zsa’s at the plaza and now owner of The Red Rooster at Shops of Marco. No secret where the name of her wonderful new enterprise came from! I soon discovered that Henry had a vast number of friends and admirers. Friends came every day to feed him, some from as far away as Naples and Golden Gate.

Henry’s arrival on Marco is still shrouded in mystery but he quickly acclimated himself to his new digs and found safe haven in the large trees along the border of the Sun Trust Bank and the plaza.  He roosted safely at night and early in the mornings he crowed proudly, sometimes from 6:30 until 9:30 AM when businesses were open and his first meal would appear.

He was cared for by the staff of Sun Trust Bank, the bank building’s other occupants, Calusa Gardens business owners, Ann Rudolph of Zsa Zsa’s and Donna from Dr. Bowen’s office, now located on Bald Eagle Drive. Diane Baker was a loyal friend. “When we moved in Henry was living on the property. Our offices were there for more than two years and Henry was there before us. I began to look after him and usually had a 50 pound bag of feed in the trunk of my car. He recognized me when I drove in and came immediately to greet me.”

Henry had a route he traveled on a regular daily basis to several restaurants and even ventured across the street to Publix where he was rewarded for his adventure across busy Collier Boulevard. It was evident that Henry had been a fighting cock because he had the spurs to prove it. We all supposed that his owner retired him and just dropped him off to fend for himself. A very cruel, indifferent abandonment but Henry managed to survive and found many friends who cared for him regularly.

I was able to make a real friend of Henry by being consistent, showing up twice a day, every day, at the same time to offer both breakfast and supper. When I noticed excess food around, I brought food only for his supper in order to avoid drawing unwelcome visitors! Henry became so familiar with me that the minute my car came into 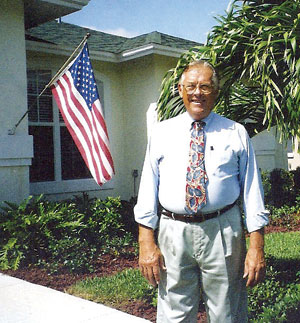 Ben Wolfe at his Marco home.

the parking lot, he almost appeared out of nowhere running up to the driver’s side. Many times I had to step on the brakes for fear of running over him. Henry became so tame that he ate out of my cupped hands talking rooster to me all the time.

One day some compassionate person dropped off a female for Henry, a beautiful Rhode Island Red hen. She was named Henrietta and our Henry immediately fell in love. They became constant companions and could be seen walking side by side along their “estate.” Ten days after her arrival, Henrietta was also tamed and eating out of my hands. During Christmas week of 2011, Henrietta suddenly disappeared. No one ever saw her again. Another mystery connected to Henry’s life on Marco.

Then, the news came that Chase Bank had acquired the property at 960 N. Collier Boulevard and planned to tear down the building and construct a new bank. A cordial welcome to Chase but Henry had to be relocated before demolition began. A search was implemented and a nice, large farm in Fort Myers was offered as a refuge.

Sadly, one night I offered Henry food and, while he trustingly ate from my hands, I picked him up gently (very gently) and took him to his new home. All turned out well because Henry found love again – this time with 30 hens! Henry was very happy with his new life. He conducted himself as a gentleman of the first order. He allowed the hens to eat before he stepped forward to enjoy his own meal.

Roosters crow and crow long and loud when they are living contented lives. Henry started crowing every morning at 3 AM waking up the entire community. Soon the complaints poured in and Henry had to go in order to keep peace in the neighborhood. A very kind lady, Kristen by name, found another home for Henry in Golden Gate and one night I drove to Fort Myers to pick him up and transport him to his new home.

Henry knew me and, as he rode along in the front seat, he talked rooster to me constantly and guess how I responded to him! At the last report Henry once again has made a good adjustment to a new home. There are many hens and Henry brought his good manners along, so all are happy, Henry and the hens.

Henry is a fine example of how to adapt to changes in our lives. All of us who called Henry friend, still truly love him, talk about him and miss him. We all hope he has a long, carefree life under the beautiful Florida sun. I want to thank Kris Hodgdon for caring for Henry a long time before I came along. None of us will ever pass the new Chase Bank without remembering Marco Island’s mascot.