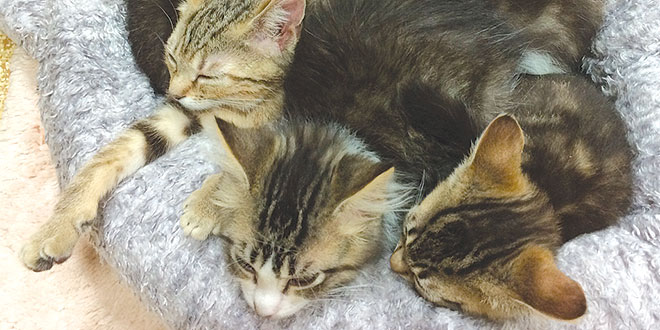 What a whirlwind the holidays were for me and my loyal staff of volunteers here at For the Love of Cats. We had cats and kittens coming and going non-stop for two weeks. Everywhere I looked I saw cats being loaded into and out of carriers; kittens climbing the romper room walls, tumbling around in colorful balls of fur, stretching sore muscles, carb-loading at their troughs, standing in and knocking over their food and water bowls, wrestling and tackling one another, and chasing each other around in dizzying circles; and then, as if someone hit a wall switch, the exhausted kittens collapsed into piles of sleeping felines. We even had a litter of six kittens travel all the way from Michigan to enroll in our renowned “leave-no-cat-behind” program.

In the midst of all this mayhem, I had to compile year-end figures for supplies used, man hours invested and medical costs incurred in 2014. Even cats are accountable to the IRS.

My dedicated staff spent an aggregate total of 10,000 man hours scooping 1,850 pounds of kitty litter and opening and serving 14,000 cans of food, in addition to maintaining the island’s 300 spayed/neutered ferals who live in managed colonies. We found homes for 150 cats and kittens; paid for 58 TNRs (trap-neuter-return); and paid out $4,100 for “Emergency and Wellness” care for 27 cats who live in low-income fur-ever homes. Twenty-five “senior” cats were rescued from death row and given to “senior” people via our “Seniors for Seniors” program.

I’m exhausted through and through, and can hardly stay awake. Consequently, I’ll be on vacation by the time you read this. I’ve left shelter co-founders Jim and Jan Rich in charge; I sure hope they can handle it. The only way I can get them out of bed in the morning is to take up my perch on the handy ledge that towers 8-feet above their sleeping heads. The instant they try to hit the alarm’s snooze button, I pounce. I call it feline base jumping, and need a willy feline volunteer to fill-in during my absence to keep 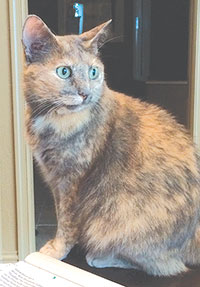 Naomi at her desk.

I know all of you want to know what my New Year’s resolution is for 2015, am I right? Rather than focussing on my diet and figure as in years past, this year I want to encourage your humans to HAVE A PLAN in place for your long-term care should something happen to them. Of the approximately 5,500 cats and kittens euthanized at Collier County’s Domestic Animal Services every year, nearly 2,000 are abandoned because for one reason or another their humans can no longer care for them, and no one in the family wants them either. Finding a guardian for your trusting feline is serious business, so please choose wisely. Consider this sad tale which emphasizes the importance of having a plan and a responsible person to see it through.

A member of my staff had a terrible experience a few Christmases back when her stepmother died suddenly and 3,000 miles away. As her stepmother was being wheeled to an operating room, her last words were spoken to her older sister, “Take care of my cats.” Three weeks later, the cats were still alone in the house. Every couple of days a relative went in to do the boxes and put more food and water out. By the time my staff member arrived on the scene, the abandoned cats were so starved for love and attention that they were nearly feral.

The evil older sister’s main concern had been one thing only: Who was the beneficiary of her sister’s life insurance policy? She had no interest in taking care of the cats. She did, however, make an effort to leave them at the local humane society, but left with the cats in tow after being told there was a $350 surrender fee. My volunteer knew that the family would move everything out of her stepmother’s house and leave the cats behind where they surely would have starved to death.

Today, “Joey” and “Amy” are living happily at a California cat sanctuary that sits on 12 riverfront acres surrounded by barbed wire-topped coyote fencing. There are no cages, and the 700 or so resident 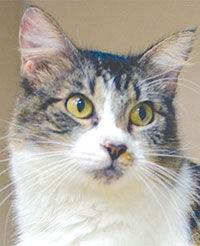 cats roam freely and safely. That’s why you humans out there really need to have a well-thought out plan. Don’t assume people are going to honor your deathbed request. Now on to happier topics.

Just before Thanksgiving, a concerned couple found a stray cat who was full of burrs, had raw paws and seeping eyes. They brushed her out, gave her lots of food, and created a nice shelter for her outside their front door. The good samaritan couple had their own gang of indoor cats who weren’t about to let an intruder in. It turned out that the poor little stray had low thyroid levels and was approximately 10 years old. A very hard cat to find a home for, but never say “never.”

The stray, who was given the elegant name “Tiffany,” ended up in one of our adoption ads. As luck would have it on the Sunday before Christmas, Jim made his weekly trip to Petsmart. When he got there, he found an older couple holding a cat carrier and a newspaper, standing in front of our For Love of Cats adoption center. They’d driven down from Bonita Springs for the sole purpose of adopting sweet Tiffany. According to Jan, who handles my phone calls and emails, Tiffany is doing great, and her new family adores her. Talk about a happy ending!

Then there’s the sad saga of “Marjory,” who was one mad and angry cat when she crossed the shelter’s threshold just before Christmas. In fact, I had to quarantine her for biting; she was that upset. She’d been abandoned twice by the same family, as was the other cat in the household who’d become her buddy. That cat found a new home, leaving Marjory alone in the world. Somehow, her supposedly “fur-ever” family got her back, then discarded her again. The reason given was that Marjory was keeping them up at night wanting some TLC. It took my staff three weeks to de-traumatize her and get her to trust again. And guess what? She came around, and a nice family who had very recently adopted one of our quieter cats decided 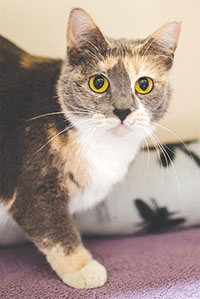 to add Marjory to their very loving household. Marjory is safe now and one happy lap cat. Who said there’s no Santa Claws?

It seems like many of you fine felines got water fountains for Christmas, and are now merrily splashing through the sea, creating tsunamis of filtered water across some 25-square feet or so of kitchen flooring. A few of your staffs have asked me how to tame these roiling seas, especially golf-course Izzy’s family who thought they were pretty clever in replacing her high maintenance fountain (i.e., changing filters and weekly cleanings of the fountain) with the whackiest thing I’ve ever seen this side of the Mississippi — a dirt cheap, filterless affair that burbles and gurgles water from the bottom of its bowl. Envision an erupting volcano here sans lava. The water is ejected with such velocity that it creates flood conditions on the lanai.

We felines understand the laws of physics and gravity. Water can’t flow uphill like salmon; it instead must drain forth from above so one can reach in with a dainty paw and shovel water into one’s thirsty mouth. In lieu of the “new” water fountain, Izzy started dragging her water dish six feet across the floor in an effort to create waves in which to play “Marco-Polo” with her three pals. She tried drinking from the pool, but her nemesis, “Tanner the thug”, pushed her in two days before Christmas. With her options shrinking, Izzy discovered that water also comes out of sink and tub faucets. The discovery meant that staff spent the holidays running around the house, turning on one of seven sink faucets Izzy chose at random. The tree never got decorated, and by Christmas Eve, Izzy’s staff was on hands and knees, begging Santa Claws to bring their little princess one of those $75 ceramic fountains. The moral of the story: You can’t fool a cat.