Hart Goes Out in Style 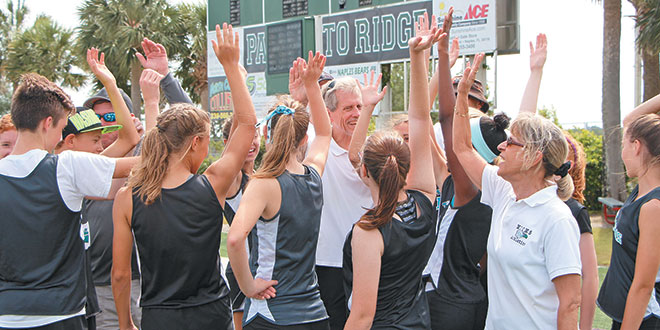 Photo by Patricia PolingHigh fives all around after MICMS girls placed third in the county’s Middle Schools Track & Field Championships.

When it comes to Marco Island Charter Middle School track this season, it had to have Hart.

She easily won both the 1,600 and 3,200 meter runs to lead the Lady Eagles to a third place finish in the Collier County Middle Schools Track & Field Championships on April 30 at Palmetto Ridge High School.

The team missed tying for second by just one point. The girls’ team winner was Gulfview with 82 points, North Naples, 66 and Marco, 64.

Hart’s first run, the 3,200, was a breeze. Hart took the lead early then maintained a pace that no one could match. Seventh grader Ellie Poling fought her way to a second-place finish, edging Meredith Hunter of

In Hart’s final race, Marly St. Louis of Manatee put on a charge to catch Hart at the 1,200-meter mark.

As she crossed the finish line Hart beamed. The race brought mixed emotions.

Photos by Roger LaLondeJohnny Watt runs in the 800 meter run, while his dad Jim, an assistant coach,gives him his split time.

feel like I did something for the school at the end.”

The question is where does she go next fall?

“I am not sure whether it will be MIA (Marco Island Academy) or Lely,” she said. 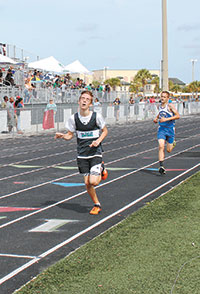 Michael Mertens gave his all and placed third in the 1,600 meter run.

only other Marco Island girl to place in the top five was Abbie Greaves, fifth in the 40 meter run.

Michael Mertens had the best score for the MICMS boys when he finished third in the 1,600 meter run in a time of 5:23.29.

The championship entrants were decided by three qualifying rounds the week before. It meant that the best eight in every category then competed.

“The girls didn’t have enough fire power,” Coach Roger Raymond said, “We were missing Susie Lynn with a stress fracture who would have given us points in at least three events.”

Overall Raymond said his teams had a phenomenal season and has several younger runners returning.

“Both teams have young runners who will mature and be highly competitive,” he said.