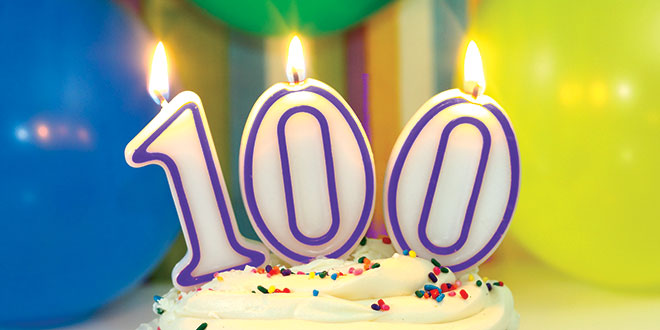 Gretchen Hawes was born on June 4, 1914, in White Water, WI, and on June 4, 2014, she celebrated her 100th birthday surrounded by friends in her Goodland home. It was a day filled with hugs, life stories, laughter, Chinese food and birthday cake.

To say Hawes has lived through some amazing times and has seen some changes in the world is a grand understatement. When she was born, women were five years away from getting the right to vote. Europe was on the brink of World War I. Woodrow Wilson was president, and Mother’s Day had just been named an official holiday. The car still was a relatively new invention. There were no televisions. No computers. No internet. No email. No cell phones.

Hawes and her husband, Charles “Chick” Hawes, moved to Goodland in 1978, after years of vacationing there. According to Kuehling, the Hawes’ spent the early years of their marriage raising their son, Harold, and running a fresh egg business in Wisconsin. They collected fresh eggs from area farmers and took the to Chicago to sell them. 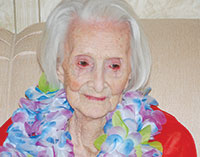 passed away in 1986, Hawes remained in their Goodland home, enjoying the sun, fishing and friends. Van Meter remembers well the glamorous vision Hawes cast each time their women’s group would meet for lunch and a movie. “She was always dressed like a lady, like a movie star,” Van Meter notes. “I always thought she looked like Barbara Stanwyck.”

Hawes’ home health care providers certainly have taken a shine to her as well. “I told her when I started working with her that I was going to stay with her until she turned 100, and here I am three years later,” joked Repco. She credits Hawes’ active and healthy lifestyle — everything in moderation and a bit of dessert everyday — to the incredible state of her health. She is not under a doctor’s care, nor does Hawes take any regular medications.

Repco recounted a funny story Hawes once told her about baking cakes: “Gretchen baked for her husband every Sunday, always from scratch. When boxed cake mixes came out in the grocery store, she would buy one, make the cake and put the box in the bottom of the trash. She kept making her ‘homemade’ cakes for him every Sunday.”

Always alert and ever watching those around her, Hawes passed on some birthday advice to her well-wishers: “Always put your plans down on paper, and never have too many of them — just one or two at a time.”