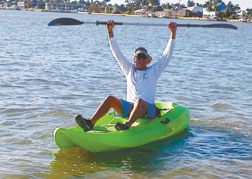 Many Coastal Breeze readers will remember the recent story of Steven and Kieu Banks, Marco Island business owners set on making a difference. The owners of Dreamlander Tours are putting together a fundraising effort, Kayak Marco 24, that will not only hopefully raise $20,000 towards three charities but will, in the process, also set a new Guinness World Record.

On April 20th, Steven Banks will attempt to do what no person has done before. He will leave the Snook Inn on Marco Island at 1:00 PM and attempt to kayak the total outer perimeter of the Marco Island, Cape Romano, Coon Key and Goodland commons area. He expects to arrive back at the Snook Inn at 1:00 PM, April 21st. A spectacular party will greet him as he will be certified as a new Guinness Book world record holder, under the category of “longest non-stop time period for one person kayaking.”

The world record is not the only extraordinary part to this story. The physical aspect alone is daunting. In this 24 hour experience, Steven will be paddling with the tide and against it. According to Steven, “There are normally two incoming tides and two outgoing tides in each 24 hour time period. The normal estimated pressure per square inch (PSI) of a normal incoming or outgoing tide is 200 pounds.” This means that with a full tide against him, he will basically be carrying an extra 200 pounds to paddle.

Then there is the wind factor. Steven explains the differentiating patterns that will work with him or against him depending on the day. “Although totally unpredictable, a wind of as little as 15 mph can have a profound influence of the outcome of any kayak trip. If these winds do exist this day, several scenarios play out:

1. I am paddling with the wind blowing inward to my back. This would be my most favorable, as it would allow me to maximize speed for a short time period.

2. Paddling into the wind. Paddling into a 15 mile wind is the same as having a 200 pound weight sitting on the front of my kayak. Catch this wind against an average strength current and it’s as if I am paddling with an extra 400 pounds of paddling pressure and weight with each stroke.

Steven should be near Cape Romano around midnight, Bull sharks often roam this area for night feeding.

wind pushing from the left or right side. Same pressure as paddling into or away from the current, only this pressure is trying to tip my kayak over sideways. Seeing how I am kayaking an island that is round, I will experience all three at different time periods. Being an island, the tide and wind conditions could change 360 degrees at the same time periods, at different locations of the Island.”

Many of these scenarios will also play out in the dark. Steven plans to be near the tip of Cape Romano at the 12-hour mark, placing him there at about 1:00 AM. “For most people sitting in the dark with your eyes open for a couple of minutes and trying to focus them is a major challenge and, for many, a horrific fear. Now imagine trying to do that for ten hours, while floating in a small plastic molded boat, battling strong currents, while cross winds are trying to tip you over.” Which brings up his next challenge… Sharks.

Sharks are typically night predators, especially that of the bull shark, which frequents the waters in our area. “These large, highly aggressive sharks (6-8 foot) commonly feed in the waters of Cape Romano and Coon Key at night. They are very curious sharks that will hunt and kill anything that tries to run away from it,” Steven explains.

While fighting tides, winds, darkness and fending off sharks, Steven will also battle his own body. “Science says my rotator cuffs and pectoral muscles should tear somewhere between the 12th and 14th hours of paddling.” Not to mention cramps, fatigue, circulation loss and mental exhaustion.

While the desire for a Guinness World Record may be enough inspiration for a person to attempt such a feate, Steven’s original goal was never to make a record. It is actually secondary to his main goal. Through personal experience and a passion for helping those less fortunate, Steven and his wife, Kieu, currently donate a portion of their proceeds from Dreamlander Tours towards different charitable organizations. Their goal through Kayak Marco 24 is to help three different charities.

Currently they are donating towards helping a family in Mexico. “Our first needs are going to a 60 year old woman, Leonarda Urestiougi, who is progressively losing her sight and her son, Roberto, who is 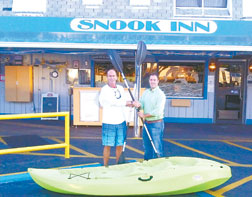 Steven Banks and Pastor Ben Sprankle at The Snook Inn, launch and return site for the event.

epileptic and has five to six seizures a day. Treatment in Mexico hasn’t been able to help them so we are in the process of getting them immigration visas that are around $3,000 a piece to bring them here in order to get them proper medical care.”

Banks is also establishing “One World Foundation,” a non-profit organization where the ten percent his family donates to charity will now go. “One World Foundation” will be their international outreach program to help families like the Urestiougis, providing financial, medical and other support throughout Central America as well as a project in Malawi, Africa. The project in Malawi, called “Partners in Hope,” is a medical center who offers free treatment for adults and children that have the HIV and AIDs virus, as well as other services such as education and in some cases, providing care for local orphans. Fifty percent of the money raised from Kayak Marco 24 will go towards the “One World Foundation” to be spread among these groups.

The other fifty percent raised will go to a local, Naples organization called IMPACT. This is the outreach ministry of the Family Church of Naples. As Pastor Ben Sprankle explains, IMPACT partners with local ministries and organizations to meet needs to make an impact in the community and an impact for Christ.” Some local partnerships include Habitat for Humanity and St. Matthew’s House. Impact events range from reaching out to the homeless to Easter egg hunts for low-income children. “Money for IMPACT mostly comes through donations within the church,” adds Pastor Ben, “the contribution through Kayak Marco 24 will help tremendously.”

“This financial support will change, beautify, and in some cases save, many adults and children’s lives. My goal is to raise $20,000. If everyone reading this sends $1.00, I will reach this goal and many people’s lives will be changed and saved! So please consider all that I am willing to risk for $1.00,” emphasizes Steven. “But if you feel in your heart that you would like to send more than $1.00, feel free!”

Any financial support may be made payable to KAYAK MARCO 24, C/O Steven Banks, 2701 55th Terrace SW, Naples, FL 34116. Platinum, Gold and Silver sponsorships are available as well as volunteer opportunities. To learn more about the upcoming event visit www. dreamlandertours.com or email Steven at dreamlandertours@yahoo.com